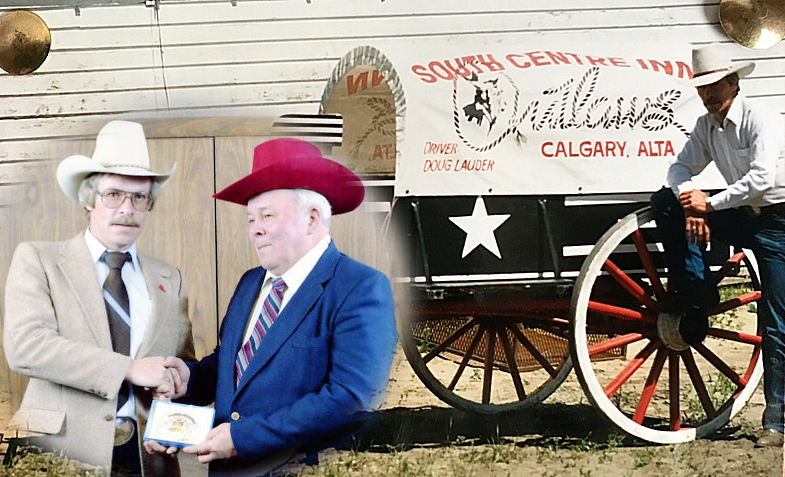 The World Professional Chuckwagon Association is mourning the passing of former competitor Doug Lauder on Saturday, December 4, 2021, after a valiant battle with cancer, at the age of 75.

A third generation competitor from one of the most iconic chuckwagon families, Doug was the grandson of legendary chuckwagon driver Tom Lauder and the son of top competitor Jack Lauder. Doug started his chuckwagon career as an outrider at age of 17 in 1963 and outrode for 18 years. He capped off his outriding career in style in 1980 helping his cousin Tom Glass capture two major chuckwagon events at the Battle of the Giants and the North American Chuckwagon Championship en route to Glass' first career World Chuckwagon Championship.

A few years later Doug decided to start competing as a chuckwagon driver, and took out a permit with the World Professional Chuckwagon Association in 1983 placing 9th out of 16 permitted wagons. He took out his permit again in 1984, and won his first career day money on the final night of the Grande Prairie Stompede, edging out his cousins Tom Glass and Richard Cosgrave. By season's end Doug was tops out of 16 permitted wagons, and won the WPCA's Top Permit Holder Award with nearly twice the amount of points ahead of his nearest competitors in Orville Strandquist and Edgar Baptiste.

In 1985 Doug, along with George Normand and Reg Johnstone (with two wagons), made history by qualifying for the first ever Championship Final Heat used to declare the champion of a WPCA show at the Grande Prairie Stompede.  He ended up as the reserve champion to Reg Johnstone by less than a half second, but in the process, Doug also became the first permit holder to qualify for a WPCA Championship Final. Doug made the decision to take out full membership in the WPCA mid way through the 1985 season and finished out the year by placing an impressive 14th overall in the World Standings. Upon conclusion of the 1985 season, Doug had not only won the WPCA Top Rookie Driver award, he had also secured a spot at the Calgary Stampede Rangeland Derby in 1986.

At the 1986 Calgary Stampede Canvas Auction, the CN Tower out of Toronto purchased Doug's tarp, paying the 14th highest price out of 36 wagons, and he was the highest selling of the four rookie drivers that competed that year. Penalties proved costly, but he still managed to place a respectable 26th overall in his Stampede debut. He finished the WPCA season in 18th place overall in the World Standings, just missed qualifying for his second consecutive Rangeland Derby, and retired at the end of the 1986 season.

Doug is survived by Betty Egan - his Partner of 16 years; 3 sons and daughters-in-law - Shawn and Lori, Randy and Connie, and Chance and Samantha; 2 precious granddaughters Rhys and Callie and precious grandson Cullen. He is also survived by his sister-in-law Gail Lauder, and his cherished "Sister" Butch Potter. Also saddened by his passing are numerous extended family and friends. Doug was predeceased by his father Jack Lauder, his mother Kay Becker and his brother George.

A Celebration of Life will be held in the spring at the Water Valley Saloon - details will be provided at a later date.

The family would like to thank Dr. Bill Ward and all of the kind, considerate and compassionate staff at the Sundre Hospital for taking such good care of Doug. Also, a big thank you to Jaymie of Didsbury Home Care. Memorial donations in Doug's honour can be made to the Sundre Hospital.

Doug will be missed by all in the WPCA, and we extend our sincere condolences to the Lauder family.