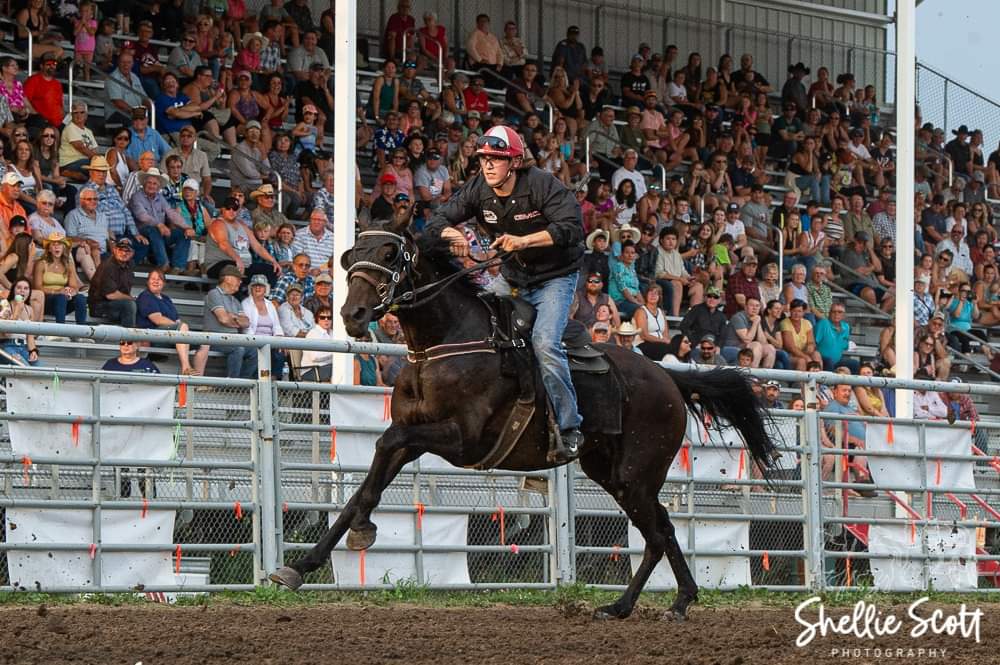 A broken leg delayed his outriding career, but after competing in 2021, rookie outrider Tyler DeSutter is now focused on achieving his goals and being the best he can be in 2022 and beyond.

Every competitor has their own story. For rookie outrider Tyler DeSutter, his interest in chuckwagon racing started when he was a kid. Tyler grew up around the sport as his father Jeff was part of the pipeline group that sponsored Rick Fraser for many years.  Tyler remembers going on the road with the Frasers and it was a dream come true. ما هو فريق كريستيانو رونالدو Since then, outriding was something Tyler has always held is heart on.

In 2018, Tyler started working as a barn hand for WPCA driver Chanse Vigen.  Tyler expressed an interest in being an outrider, so with Chanse's support, Tyler would ride with Chanse in the mornings.  Chanse wasn't going to just throw Tyler into action though. He wanted to make sure Tyler was ready, so he put together a 2 year plan for Tyler before he started competing.

In 2019, Tyler signed with the Edmonton Wildcats Football Team.  He played during the pre season, then during the Calgary Stampede, while helping Chanse behind the barns, he broke his leg during an accident while hooking horses on the first night.  When Tyler got to training camp for the Wildcats to start the season, his leg wasn't healed, so he was out for the season.  During the off season Tyler was told by his coach, if he focused on football he could go places, but Tyler's heart was on wagon racing since he was in diapers, so deciding between football and outriding was an easy choice.

In 2021, Tyler was officially sanctioned to outride during the WPCA Dewberry event. He would finally get his first professional ride as an outrider at the the Battle of the Foothills in High River where he rode for WPCA drivers Cody Ridsdale, Evan Salmond and Dean Dreger. "I was pretty anxious and the first night didn't go as planned" he said. "My first ride was for Cody Ridsdale. My family was there, I got tossed and and knew this was not how I envisioned things to go." Tyler was determined to come back bigger and better on night two, however, the following morning while he was galloping horses he sustained multiple injuries.  One horse he was riding made a sudden move and tried to duck towards a gate and Tyler was tossed. مواقع البث المباشر "I had broken ribs, full body trauma and a major concussion" he said, "I spent the day in hospital and was out until the Strathmore show."

The time off gave Tyler some time to regroup and refocus. He had good rides in Strathmore and started to gain confidence in his abilities. "On the first night of Strathmore I settled in with a good mindset and knew what I wanted to do and how I wanted to do it.  In the end it worked out pretty good." After Strathmore, Tyler became more comfortable and consistent. He rode for drivers Kelly Morin, Wade Salmond, Chanse Vigen and Colin Lefley. 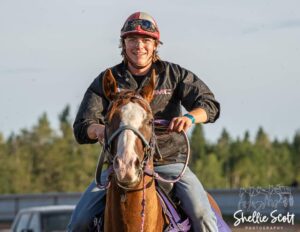 Having family support has been important to Tyler and he appreciates the effort they have made to help him live out is dream. "Ever since I have been riding my mom and dad have always tried to come as much as possible" he said,  "When I first started going on the road alone and working with Chanse, WPCA photographer Shellie Scott who spent time at his camp would always look out for me and to this day wants the best to me."  Tyler chuckled and referred to Shellie as his mom on the road. افلام سباق

As part of his development, Tyler watches race films and analyzes the likes of Chanse Vigen, Chad Cosgrave and Reo King to learn from them along with other successful outriders who are retired and a few who are still competing. "In 2021 I was trying to get my feet wet and show what I can do. I worked a lot with the Motowylo boys, Ethan and Hayden so that was a big help.  In 2022 I want to prove that I can do it with class and move up to ride for other drivers, be the best horseman I can be and do my job right.

During the off season Tyler continues to weight train daily and study race film. He looks forward to April 1st when spring training starts with Chanse Vigen and he may help other drivers in the Grande Prairie area he outrode for in 2021. "I want to get on as many horses for as many drivers as I can in the spring" he says, "the more riding I do the more I will learn and get better."