MITCH SUTHERLAND TO RETURN TO RACING AFTER NASTY INJURY

Most active people at some point in their life will sustain an injury of some kind. For athletes participating in sporting events the question usually isn't "if you're going to get injured," it's when and how bad?  While most injuries take place when a person is actually participating in the sport, it's the injuries behind the scenes that can be the most frustrating.

For WPCA driver and 2016 Calgary Stampede Reserve Champion Mitch Sutherland, injuries became all too real when he suffered a fractured tibia and ruptured achilles tendon the day before the 2019 Century Downs World Finals.  The injury kept him out of the inaugural event, forced him to wear a walking boot for 3 months and go through a rehabilitation process so he can drive on the WPCA Pro Tour in 2020.

“We have portable stairs to get into the tack room on the back of the semi, and they weren’t pushed in all the way.” says Sutherland. "I was coming out of the tack area then dropped about 4 feet, felt a pop and knew it wasn't good.  I felt pretty nauseous afterwards but kept it in."  Injuries come in many forms and in some cases nausea is the first sign of a traumatic injury.

Fast forward 5 months and with some extensive physiotherapy, strength training and stretching, Sutherland has already returned to 90% ankle movement and 80% leg strength and expects to be 100% in time to start spring training in a couple of months.

The injury has prevented Sutherland from driving some of his new horses including Run Macho Run. The 5 year old Florida bred chestnut gelding raced in California and won over $85,000.00US in just 22 races. "He is a good looking horse with a good record" said Sutherland. "Former WPCA outrider Reo King picked 6 horses up for me including Macho and he is the youngest so I'm hoping for big things."

Another horse Mitch is most excited about, besides getting stakes winner Power Corrupt back after nursing him back from a bowed tendon is 2014 California Derby winner "Exit Stage Left".   Mitch says he's all horse with a great record and with earnings over $150,000.00US in just 6 races it's obvious the horse can run. 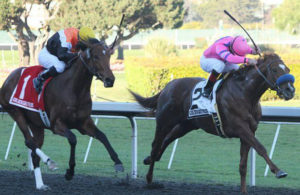 On top of the 6 horses Reo lined up, Mitch has 5 horses he raced in Edmonton and Phoenix and will retire them to be wagon horses this year.

Mitch Sutherland and 35 of the best chuckwagon drivers in the world will return to racing when the 2020 WPCA Pro Tour present by GMC kicks off May 27th at the Grande Prairie Stompede.

A drivers feet and legs play an important role when driving a chuckwagon. The feet and legs are used for bracing and balancing on the dashboard (front of the wagon box) and some drivers like to stand up in the box.  Balance becomes important during the figure eight of the barrels when a drivers body position and weight shifts during the turns.

Beyond the talents and horsemanship one requires to be a chuckwagon driver on the WPCA Pro Tour, there is a physical and health requirement as well. As part of the WPCA's commitment to safety, all drivers are required to pass a detailed medical evaluation before being cleared to drive on the WPCA Pro Tour.

The 2020 WPCA Pro Tour presented by GMC will consist of 45 race days with an additional 10 days during the Calgary Stampede.

With 5 day passes already on sale for the 2020 WPCA World Finals, Century Downs...

On a sunny Saturday afternoon during the winter, people take part in a number of...