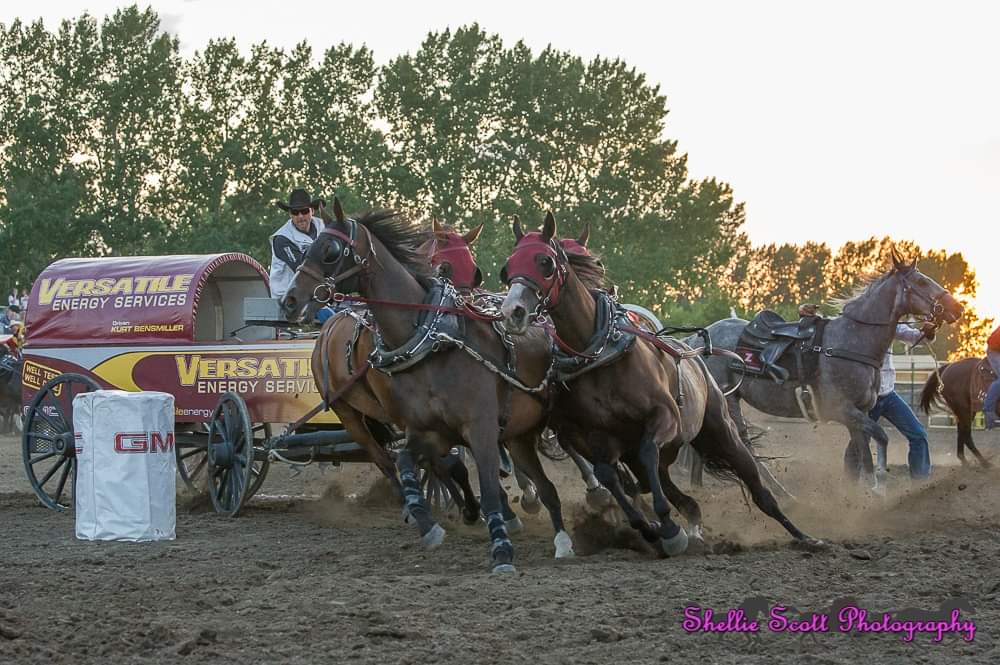 In 2019, Kurt Bensmiller became the third straight driver to win back-to-back shows in Strathmore. The win put him second in the WPCA World Standings at the time.

After a jam-packed first half of the 2019 WPCA season, driver Kurt Bensmiller and his team showed up in Strathmore ready to defend his title. Only three drivers have won the last six Strathmore Stampedes. Gary Gorst, Jason Glass and now Bensmiller. Each won their respective shows in back-to-back years.

Unfortunately for Bensmiller he can’t go for the three-peat in 2020. If he’s able to be back in the finals in 2021 and is lucky enough to win, he says people might not look at it as a “three-peat” due to having the year off. “Lots can change in two years with your horsepower, horses… everything. I mean, even budget alone we don’t know what’s happening with sponsorship. So it’s disheartening.”

Before Strathmore and the break, he and 29 other WPCA drivers took part in the 2019 Calgary Stampede GMC Rangeland Derby. Bensmiller, a three-time winner in Calgary, was looking to continue his reign at the “Greatest Outdoor Show on Earth.” Unfortunately, penalties and lack of time left to catch-up in the standings meant he couldn’t compete for another Dash for Cash.

“Well Calgary didn’t go as planned,” states Bensmiller. “I was still trying out a few horses and was missing a couple of key horses I won with in the past. I think I took penalties on three nights. I think I got 10 seconds on night two and I almost climbed back into the top eight because the horses were performing (well.) It was just a disappointment because the horses did what they had to do and I just wasn’t on my game.”

After the Rangeland Derby the focus shifted to Strathmore and the home-stretch drive to Century Downs Racetrack and Casino. But first a chance to relax at the lake and enjoy some summer with his family. 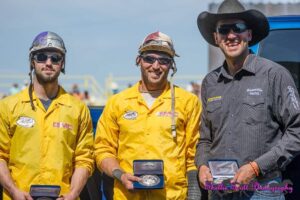 A focused but relaxed Bensmiller heading into Strathmore isn’t exactly what his competition liked to see. During the Strathmore Stampede, the Duke of Dewberry won over $1,600.00 in day money and finished atop the aggregate standings. “It’s a show we’ve always enjoyed going to. It seems like when we have a break, the horses are fresh and start to get going again we seem to really be rolling.”

Rolling indeed. On the four barrel, he out ran two Calgary Stampede Champions (Logan Gorst and Kirk Sutherland) and the current leader in the World Pro Standings (Vern Nolin.) Bensmiller says he has quite a lot of success with his three and four barrel outfits which helped him again. His outriders, Rory Gervais and Cole Somerville also helped contribute to this win and to his success in the 2019 season.

“The two of them, I don’t know if they ever butted heads too much but those guys were phenomenal and I think there was maybe two seconds (in penalties) between the two of them through the entire season. So to find a crew like that, is very important for a champion team for sure.” 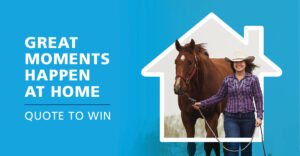 With only three races left in 2019, Bensmiller and the WPCA tour headed up to Dawson Creek, B.C. for the Battle of the North where Chanse Vigen claimed his second victory of the 2019 season.