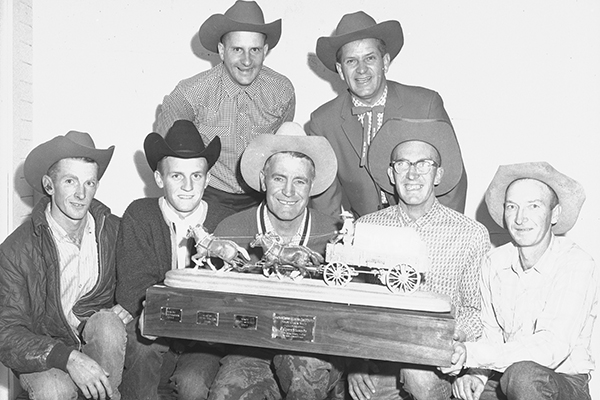 The World Professional Chuckwagon Association was saddened by the passing of former outrider Wally Greenwood on Sunday, February 20, 2022 from natural causes at the age of 80 years.

The 1965 Rangeland Derby was a very special one for Wally. Not only did he win his third Calgary Stampede with his father Bill Greenwood, but his brother Hugh was also outriding that year for their father Bill, making it a Greenwood family affair on the championship outfit. But the following year, on July 15, 1966, a tragic accident in the bareback bronc riding contest at the Calgary Stampede abruptly ended Wally's rodeo and chuckwagon career when he was thrown from his mount, breaking his neck, and suffering permanent partial paralysis of his arms and legs. He was in and out of the hospital for 18 months, but Wally's determination combined with the support of family, friends, and medical professionals, Wally walked out of the hospital with the aid of a cane. After his accident, Wally turned his focus to being a businessman and even had a short stint in politics.

A Celebration of Life will be held at the Lousana Community Hall, 19th Ave and 11 St, Lousana AB, on Saturday, April 2, 2022 at 2:00 pm. In lieu of flowers, memorial donations may be directed to STARS Air Ambulance, 1441 Aviation Park NE, Box 570, Calgary AB, T2E 8M7 (or online here), or a charity of one’s choice. Arrangements in care of Meaningful Memorials Funeral Service.

Wally will be missed by all in the WPCA, and we extend our sincere condolences to the Greenwood family.