WPCA Saddened By The Passing Of Former Competitor Garry Mayan 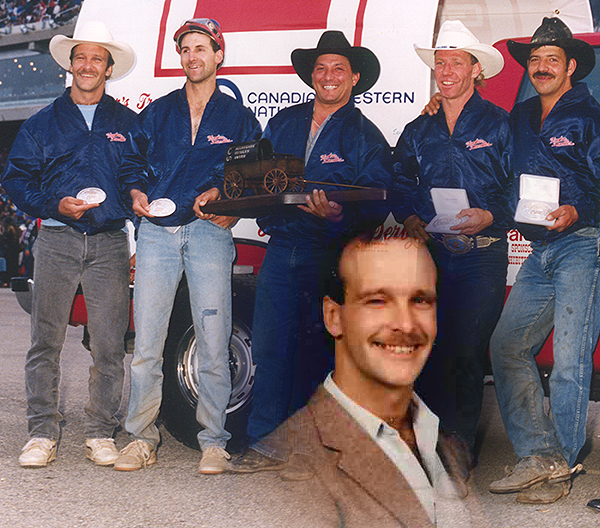 The World Professional Chuckwagon Association was saddened by the passing of former competitor Garry Mayan on Friday, October 8, 2021, at the age of 60.

A second generation chuckwagon competitor, Garry started his career as an outrider at age 15 in 1977 with the Northern Chuckwagon Racing Association, and eventually moved up to the World Professional Chuckwagon Association in 1984. Over the next 14 years Garry would win some of chuckwagon racing's most prestigious events outriding for some of chuckwagon racing's most celebrated drivers.  He won the North American Chuckwagon Championship 3 times with Dallas Dorchester, Richard Cosgrave and Tom Glass, the Ponoka Stampede and Big "M" Stampede with Kelly Sutherland, Edmonton's Chuckwagon Derby with Ward Willard, the Grande Prairie Stompede with Tom Glass and the Strathmore Heritage Days with Dallas Dorchester. In 1995 - in the twilight of his outriding career - Garry won an incredible 5 show championships, including helping future legend Jason Glass capture his first ever event as a chuckwagon driver at the Trout Springs Chuckwagon Derby. Garry's proudest and most prestigious wins came in 1993 when he won the Calgary Stampede Aggregate Title with Richard Cosgrave and at the 1994 Calgary Stampede Rangeland Derby with Tom Glass.

In 1991 Garry made his debut as a chuckwagon driver at the Trochu Chuckwagon Championship. 1991 would be the only year Garry competed as a chuckwagon driver, but the year would be a memorable one. By the time he drove his last race at the Kamloops Rangeland Derby, he was named the WPCA's Top Rookie Driver for 1991, and at different times over the season Garry was able to compete in the same heat with champion drivers such as Kelly Sutherland, Neal Walgenbach, Jerry Bremner, Grant Profit, Kirk Sutherland and Smoky Wilson. He also finished the 1991 season in 4th place overall in the World Outriding Standings - a career best. Garry continued to compete as an outrider and retired after the 1997 season.

Garry is survived by his partner, Debbie Sprouse; his daughters Stephanie and Kaitlyn Mayan (Nathan), his precious grand-daughter Presley and his step-son Kyle Sprouse. He is pre-deceased by his step-son Craig Sprouse. Also mourning his loss are his siblings, nieces and nephews, and numerous extended family and friends.

Garry will be missed by all in the WPCA, and we extend our sincere condolences to the Mayan family.