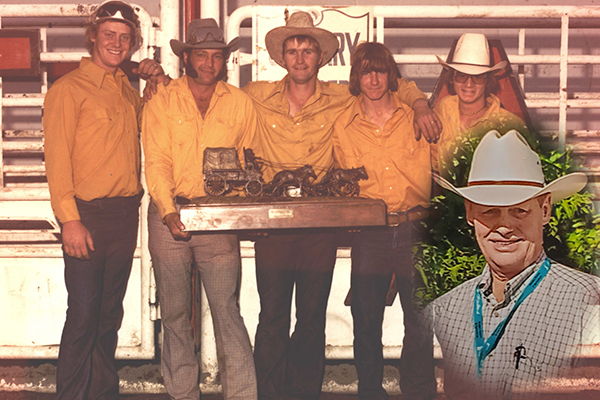 The World Professional Chuckwagon Association was saddened by passing of former chuckwagon driver, outrider, and judge Allen McMillan on Monday, April 12, 2021 after fighting a valiant battle against cancer at the age of 66 years.

Allen grew up around Stettler, Alberta and began his chuckwagon career at the age of 15 as a barn hand for chuckwagon legend Hally Walgenbach in 1970. By the time they got to Meadow Lake, Saskatchewan that season, Allen found himself competing in his first show as an outrider for Hally Walgenbach. It was a tremendous success as the Walgenbach outfit with outriders Allen McMillan and Doug Nelson went on to capture the Meadow Lake Stampede in Allen's debut as an outrider.

Over the next 15 years Allen had a very successful outriding career. Known as one of the top lead men in the game, Allen was the only outrider to make the final ballot two years in a row in 1977 and 1978 when the World Champion Outrider was declared through a vote by the chuckwagon drivers and outriders. His first victory in a major show came in 1975 at the Cheyenne Frontier Days behind Orville Strandquist, and he followed it up with three wins at the Calgary Stampede Rangeland Derby Championship with Kelly Sutherland in 1977, Herman Flad in 1980, and Bruce Craige in 1981.

As a chuckwagon driver, Allen drove at the Cheyenne Frontier Days 3 consecutive years from 1975 to 1977, and competed at the Calgary Stampede in 1980. In 1980 he teamed up with fellow chuckwagon competitors Lyle Pambrun and Kirk Sutherland to win the Wild Horse Race at the Cheyenne Frontier Days before retiring from active competition in 1984. Allen resumed his chuckwagon career as a judge at the Calgary Stampede from 1999 until 2019.

Allen is survived by his loving family: son Chad (Laurie) and their children Dakoda (Bryce), Teahanna (Trevor) and their daughter Priya; son Kent (Tara) and their children Peyton, Fletcher and Nev; daughter Lorene (Taylor) and her son Riley; nieces, nephews, other family members and many dear friends and neighbors. Allen was predeceased by his wife Shellene (Mailer) McMillan. A private family funeral service will be held. Donations in memory of Allen are gratefully accepted to the Stettler Hospice Society or a charity of the donor’s choice.

Allen will be missed by all in the WPCA, and we extend our sincere condolences to the McMillan family.