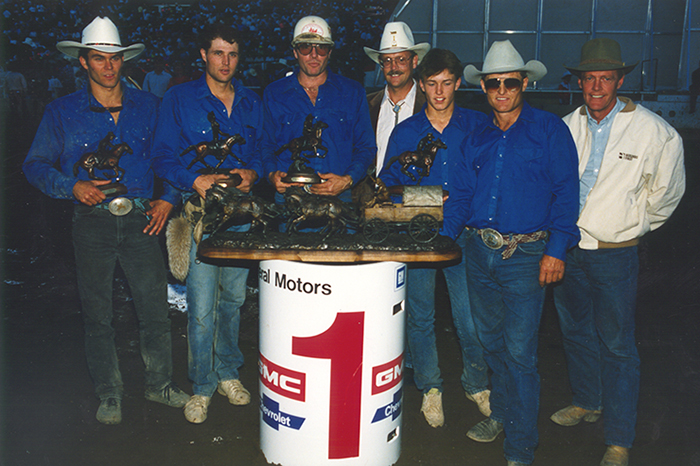 The World Professional Chuckwagon Association was saddened by passing of former Active Supporter Wayne Scaddan on Wednesday, May 1, 2019, at the age of 75 years.

A longtime fan of the sport of chuckwagon racing, Wayne first became actively involved in 1989 with his company Builders Square as a sponsor on the WPCA Pro Tour with driver Smoky Wilson. Wayne and Builders Square continued with Smoky Wilson in 1990 on the Tour and sponsored at the Calgary Stampede for the first time. In 1991, Builders Square was rebranded Builders First and Wayne started a partnership with driver Dallas Dorchester and watched his wagon post wins at the Calgary Stampede, Strathmore Heritage Days and the Kamloops Rangeland Derby.

Wayne was a lover of statistics, and truly believed in the econoimic value of chuckwagon sponsorship. Wayne measured and attributed Builders First sales, which hit record levels, to their involvement with the chuckwagon races. Wayne felt that no other exposure (television, radio, etc.) could have given their company the returns they got through sponsoring the chuckwagon races. Wayne and Builders First were the title sponsor of a new show in 1991 at the Trout Springs racetrack west of Calgary, and that same year Wayne received the WPCA's highest annual award, the WPCA Chuckwagon Person of the Year.

Wayne will be sadly missed by his wife of fifty-four years RuthAnne, and by his daughters, Stacey (Michael) Welch and Erin (Michael) Beattie; and his beloved grandchildren, Christopher, Liam, Jordan and Brynn. He is also survived by his brothers, Vernon and Lloyd; and his sister Mable. He was predeceased by his brother Lorne.

A Gathering will be held in the Hospitality Centre at McINNIS & HOLLOWAY (Fish Creek, 14441 Bannister Road S.E., Calgary, AB) on Wednesday, May 8, 2019 at 2:00 p.m. Condolences may be forwarded through www.McInnisandHolloway.com.

Wayne will be missed by all in the WPCA, and we extend our sincere condolences to the Scaddan family.