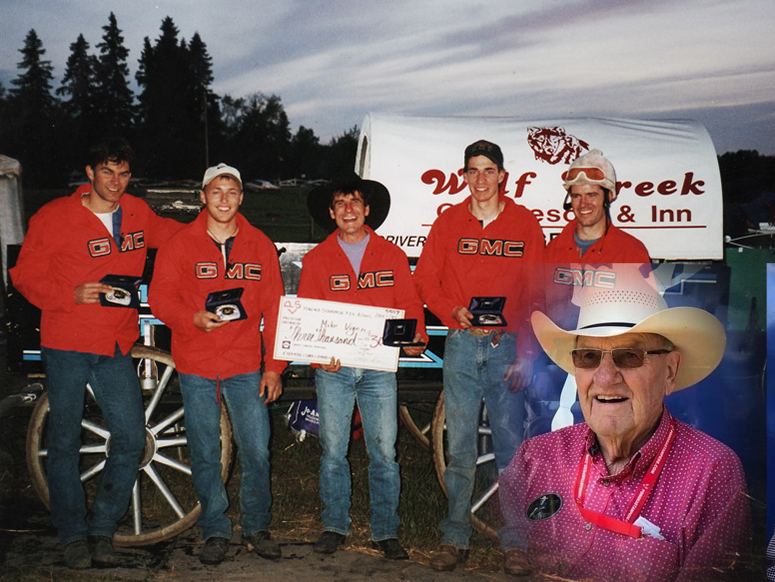 The World Professional Chuckwagon Association is saddened by the passing of longtime active supporter Ralph Vold on Thursday, April 14, 2022 from natural causes at the age of 91.

Ralph Vold grew up in the Asker area east of Ponoka, Alberta. An outstanding athlete, throughout the 1950's Ralph played minor professional hockey in the Boston Bruins organization, and minor professional baseball in the Brooklyn Dodgers and San Francisco Giants organizations. While playing baseball in Arizona in 1957, Ralph received a phone call from his brother Harry who convinced Ralph to come home and join him in the local auction business. Vold and his brother Harry, along with Bill and Shorty Jones, then purchased an auction barn in Ponoka, Alberta, and Vold, Jones, and Vold Auctions were born. By 1970 Ralph and his son Blair had bought out their partners, and Vold, Jones, and Vold has been a very successful auction business for over 60 years. In the early 1980's Ralph began to construct a golf course and clubhouse on the family's land near Morningside, Alberta, and in 1985 the first nine holes of the Wolf Creek Golf Resort was open for play. The Wolf Creek Golf Resort ultimately became one of the world's Top 100 Golf Courses, and hosted a number of professional and top ranked amateur golf tournaments.

Ralph was also a longtime volunteer with the Ponoka Stampede Association, and was instrumental in the growth of the Rodeo and Chuckwagon Races at the Ponoka Stampede. In the 1990's when the the WPCA chuckwagon drivers started selling their canvas' through public auction, Ralph got heavily involved as an active supporter of the chuckwagon races at the Ponoka Stampede, purchasing a number of driver's tarps. Between the Wolf Creek Golf Resort and Vold, Jones and Vold Auctions, Ralph sponsored a number drivers over a twenty year period such as Troy Dorchester, Mike Vigen, Reg Johnstone, Herman Flad, Jake Friesen, and Leo Tournier among some others. In 1997 Ralph captured his hometown Ponoka Stampede Chuckwagon Championship with the Wolf Creek Golf Resort and Inn with Mike Vigen driving.

A celebration of Ralph’s life will be held at the Calnash Ag Event Centre in Ponoka at 1:00 p.m. on Tuesday, April 26, 2022. Memorial donations are gratefully accepted to the Canadian Pro Rodeo Hall of Fame, Ponoka Community Health Centre (Home Care), or any charity of your choice.

Ralph will be missed by all in the WPCA, and we extend our sincere condolences to the Vold family.