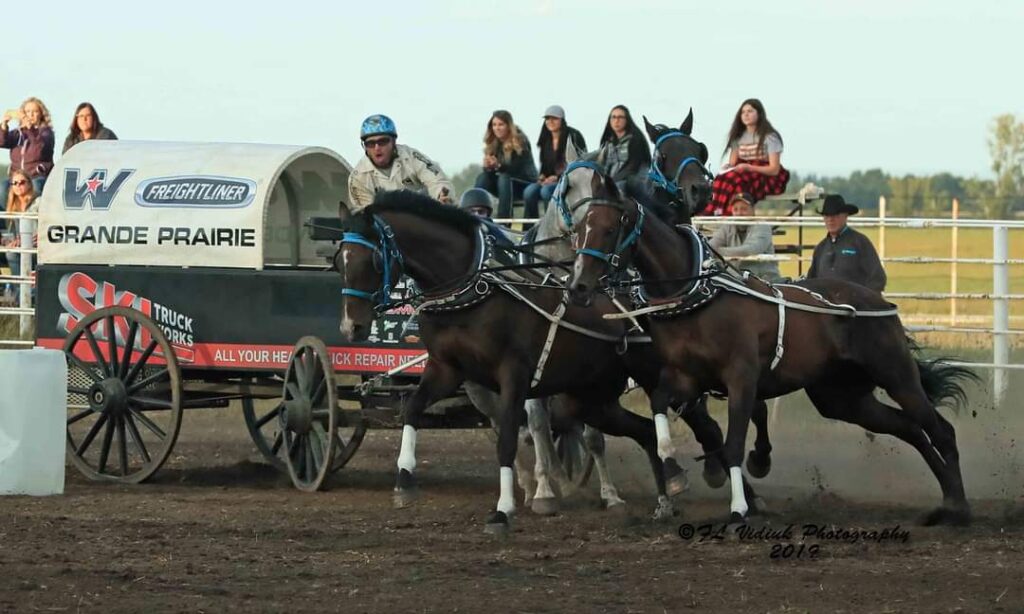 After eight years with the Western Chuckwagon Association (WCA), Erik Tremblay is looking for a higher level of competition and will join the WPCA Pro Tour in 2021.

What seems like so long ago, the 2019 WPCA Pro Tour wrapped up at Century Downs Racetrack and Casino on August 25th.  Along with determining a world champion, the top 30 of 36 drivers in the year end standings would automatically qualify for the following years tour.  The bottom 6 would be required to participate at a four day run-off in Dewberry, Alberta where they would compete against other drivers interested in being part of the WPCA Pro Tour.

Twelve drivers registered and competed in the run-off for one of the 6 available spots.  One of those drivers was WCA's Erik Tremblay from Sexsmith, Alberta.  Erik had a successful 2019 season with the WCA having finished in first place and recording the season championship.  During the 2019 WCA season, Erik won the Grande Prairie Stompede Aggregate, the Boots and Moccasins event and the "Rycroft Race the 8".

Erik finished the WPCA Run-Off in 8th position, 2 spots out of the 6th and final qualifying spot.  It appeared Erik would not be racing with the WPCA when the next season started, however, since the 2019 run-off, Curtis Morin and Lane Tournier who both qualified to race with the WPCA through the run-off, have decided not to return. Tournier participated in the run-off after finishing the 2019 season on the Canadian Circuit while Morin raced with the WPCA and was one of 3 rookies competing at the Calgary Stampede.  Curtis Morin has retired from wagon racing to spend more time with his family.  With Curtis Morin and Lane Tournier not being part of the WPCA in 2021, the opportunity opened up for Erik Tremblay to be part of the tour since he was 1 of 2 drivers next in line through the run-off standings.

Erik's interest in chuckwagon racing started back when his dad was sponsoring wagons in the Western Chuckwagon Association. Like many people, after some time around the sport it got in his blood  and he became interested in racing wagons himself. Erik first purchased 2 pony horses and began racing pony chariots followed by a move up to the pony wagons. Taking it one step further, he then moved on to thoroughbred chariots and finally up to the big thoroughbred wagons with the WCA in 2012 where he performed consistently with placings in the top 1/3 of the WCA standings and multiple day money finishes.

In 2016 Erik finished the WCA season winning both the John Neilson Memorial "Dash For Cash" in Grande Prairie, AB and the "Dash for Cash" in Dawson Creek, BC. In 2018 Erik focused on training young horses and building a strong barn.  It paid off with multiple top 3 runs.

With some experience and success on his resume, Erik is now looking at the WPCA to take his career one step further. "I wanted to join the WPCA to race against a higher level of competition" he said, "I would also like to race at the Calgary Stampede one day."

Erik will have a chance to start pursuing both those goals when the WPCA starts racing in 2021.