Rae Croteau Jr. Moves To The Top After A Day Money Run On Night 2 Of The Battle Of The Rockies 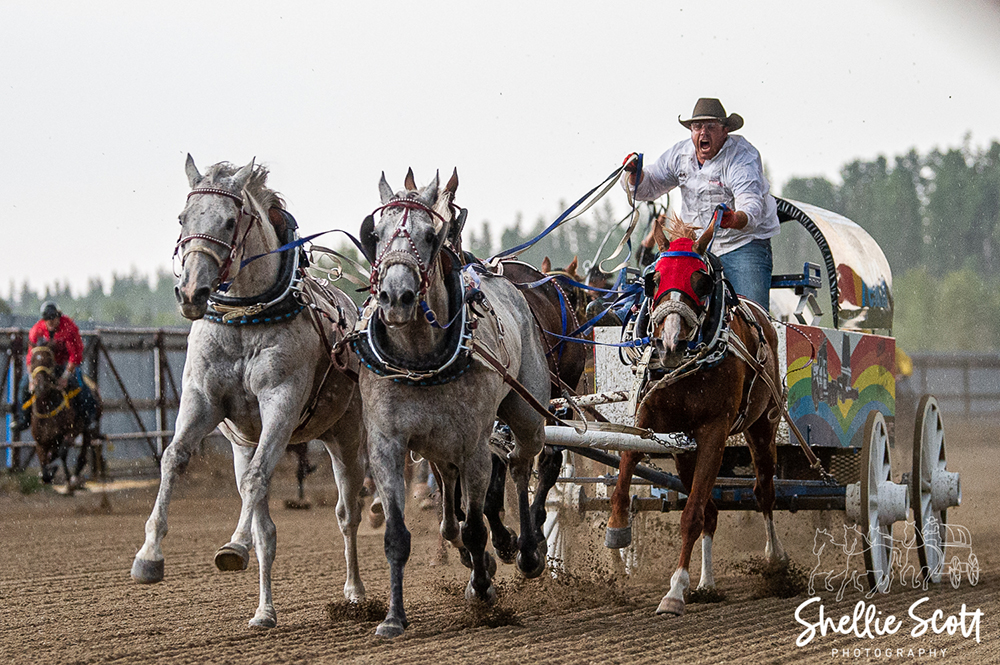 It was another hot night in Rocky Mountain House, Alberta and another tremendous night of chuckwagon racing at the Battle of the Rockies. It’s the last chance for the drivers to try and make the top twelve for a chance to qualify for the Century Downs and Casino Winner’s Zone Playoff Round. When the night wrapped up, it was Rae Croteau Jr. who piloted his TeKh Group Inc. Outfit to the top time with a penalty free run of 1:15.06.

That run was 49 one-hundredths of a second faster than Chad Fike who placed second on the night. Obrey Motowylo was third, Kirk Sutherland was fourth, while Roger Moore was fifth on the night.

The day money run vaulted Rae Croteau Jr. atop the overall aggregate standings with a two-run total time of 2:31.59. That puts him just 8 one-hundredths of a second in front of Roger Moore who has now moved up into second place overall. Layne MacGillivray and Chanse Vigen sit 3rd and 4th respectively, with Chad Fike in fifth place overall. The driver posting the best 4 day aggregate time will take home the 2022 Battle of the Rockies Championship.

With just 2 runs to go In the race for the top twelve and a playoff spot for the Century Downs and Casino Winner’s Zone Championship, Chanse Vigen with 995 points, Vern Nolin with 994.5 points and Ross Knight with 951.5 points occupy the final three spots in the playoff round. Jordie Fike, who qualified for the inaugural Century Downs and Casino Winner’s Zone Championship Final Heat in 2019, sits one spot out of a playoff spot, 22 points behind Ross Knight, with Mitch Sutherland and Dustin Gorst 102 and 103.5 points behind respectively.