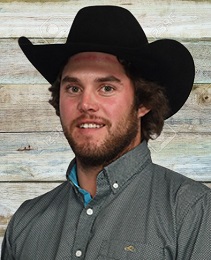 A champion outrider who is growing quickly in popularity as a chuckwagon driver, Chance just completed his second full season on the WPCA Tour. The 2021 season saw Chance post 8 top ten runs, which includes 4 runs that cracked the top five. A sixth-place overall finish at the Bonnyville Chuckwagon Championship his best of the year.

Chance was named the WPCA’s Top Rookie Driver in 2019, and was the reserve champion at the Century Downs World Finals which his career best finish.

He captured his first career show championship in his rookie year at the Ponoka Stampede behind his number one call - Doug Irvine - which he considers one of his most cherished moments.

Chance is the great-nephew of former driver the late Herman Flad, and cousin to drivers Troy and Darcy Flad, and older brother to former outrider Cole Flad. Chance and his girlfriend Brittany make their home in Arrowwood, Alberta.