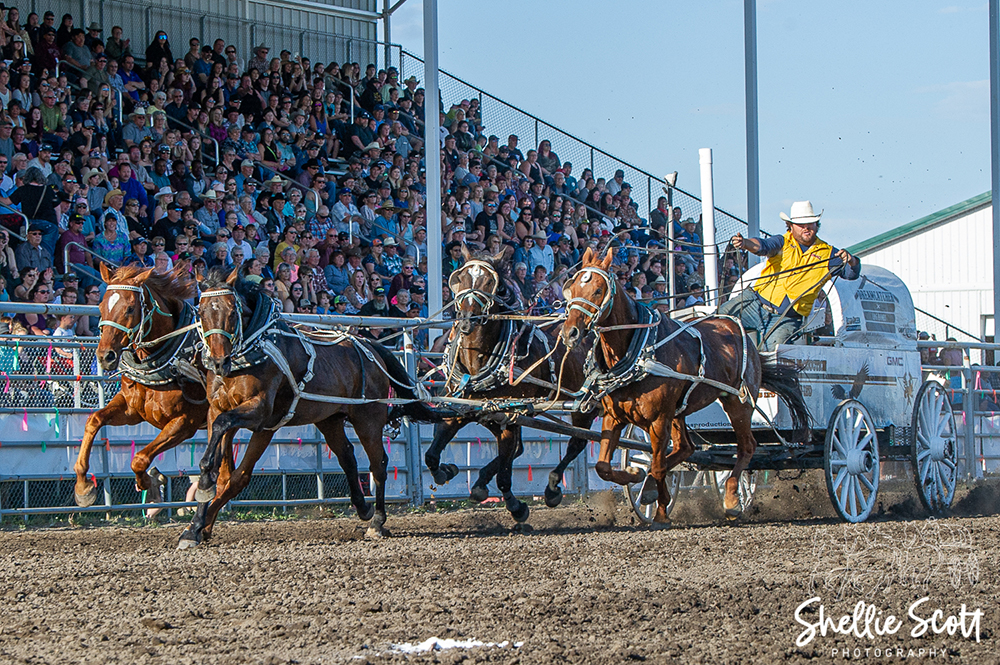 It was a fabulous night weather wise for night 2 of the Bonnyville Chuckwagon Championship. Once again a capacity crowd was on hand, and some tremendous chuckwagon races were seen by the Bonnyville chuckwagon fans. When it was all said and done, Cody Ridsdale posted the best time on the night after a penalty free run of 1:17.54.

From barrel number 4 in the third heat, Ridsdale, driving the Dreamcatcher Log Homes Outfit, was the fast man on the night by 74 one-hundredths of a second over Doug Irvine who placed second on the night. Despite a 2 second outrider penalty, Chanse Vigen got third place on the night, while Roger Moore and Chance Bensmiller, rounded out the top five on the night.

After two runs, Bonnyville resident Doug Irvine and his B&R Eckel's Transport Ltd. Outfit leads the overall aggregate standings with a two-run total of 2:37.82. That puts him 24 one-hundredths of a second ahead of Cody Ridsdale, with Chanse Vigen and Chance Flad completing the top four. Rookie driver Cruise Bensmiller is on the outside looking in, sitting fifth place overall, just 24 one-hundredths of a second out of the top four.

The top 4 wagons after Saturday’s run will compete in the Championship Final Heat on Sunday, where the winner will take home the 2022 Bonnyville Chuckwagon Championship.