WPCA Saddened The Passing of Longtime Active Supporter Ron May 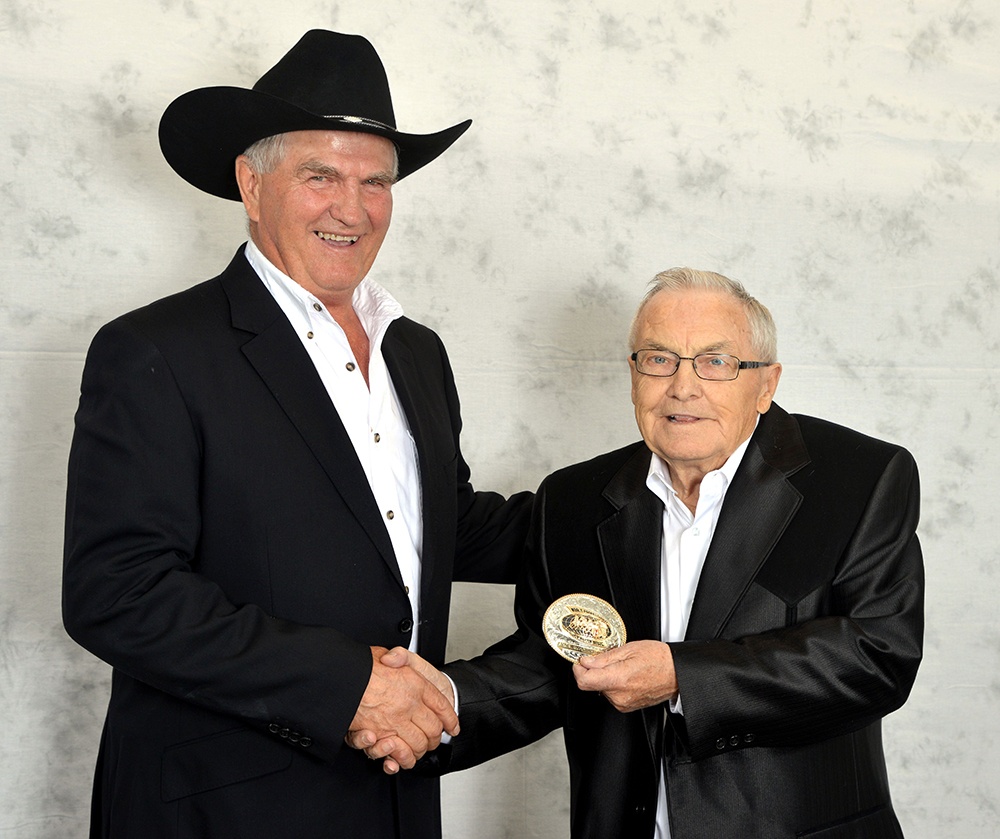 Ron May
January 29, 1939 - July 9, 2022
In 2014, Former WPCA Chuckwagon Driver Ron David (L) presented a
commemorative buckle to Ron May (R) as Special Recognition for
special contributions he has made over many years to the WPCA,
its members, and Chuckwagon Racing in general.

The World Professional Chuckwagon Association is saddened by the passing of longtime active supporter Ron May on Saturday, July 9, 2022 from natural causes at the age of 83.

As a true fan of chuckwagon racing, Ron was a volunteer at many rodeos and stampedes all over Alberta and British Columbia. Ron first got involved as a canvas sponsor with chuckwagon driver Ron David at the Battle of the North in Dawson Creek in 1995 under the canvas of Borek Transportation. Over the next 20+ seasons, Ron not only put his support behind a number of chuckwagon drivers at a number of different shows on the WPCA Pro Tour, but put a lot of support behind chuckwagon racing as a whole.

Between 1995 and 2017, under the canvas' of Borek Transportation, Tracer Transport, and Ron May Consulting, Ron put his support behind chuckwagon drivers Ron David, Jim Nevada, Cliff Cunningham, Roger Moore, Colt Cosgrave, Barry Hodgson, Chad Harden, Luke Tournier and Shane Cartier. Although most of his tarps ran on the WPCA Pro Tour, Ron had a wagon at the Calgary Stampede for the first time in 2000 with Borek Transportation to celebrate Ron David's final run at the Rangeland Derby, and in 2001 with Tracer Transport and driver Jim Nevada. Luke Tournier won the 2010 Dewberry World Chuckwagon Races under the canvas of Ron May Consulting.

In addition to supporting chuckwagon drivers, Ron and his wife Diana personally and professionally  supported chuckwagon racing as Heat Sponsors, Dash Sponsors, Award Sponsors, etc., and helped out financially or as volunteers to ensure certain chuckwagon race stops were successful. They travelled to many of the race locations, and when they could not attend in person, they were avid listeners of the WPCA Radio Program. Ron and Diana May were honored by the WPCA with its “Active Supporter Award” in 1998, and Ron himself was honored by the WPCA with its “Special Recognition Award” in 2014 for the special contributions he has made over many years to the WPCA, its members, and Chuckwagon Racing in general.

Ron is survived by his wife of over 50 years Diana May; their daughter Carrie May, son Alan May, his former wife Sherayne May and their children Kaylee Taylor May and Brendan James May in addition to his late son's children Bryson, Alayna and Roman May. Ron's daughter Cheryl (Gary) Storey and their children Hayme, Warren and Warren's daughter Paisley. A Celebration of Ron's Life was held on Tuesday, July 19, 2022 in Edmonton, Alberta.

Ron will be dearly missed by all in the WPCA, and we extend our sincere condolences to the May family.