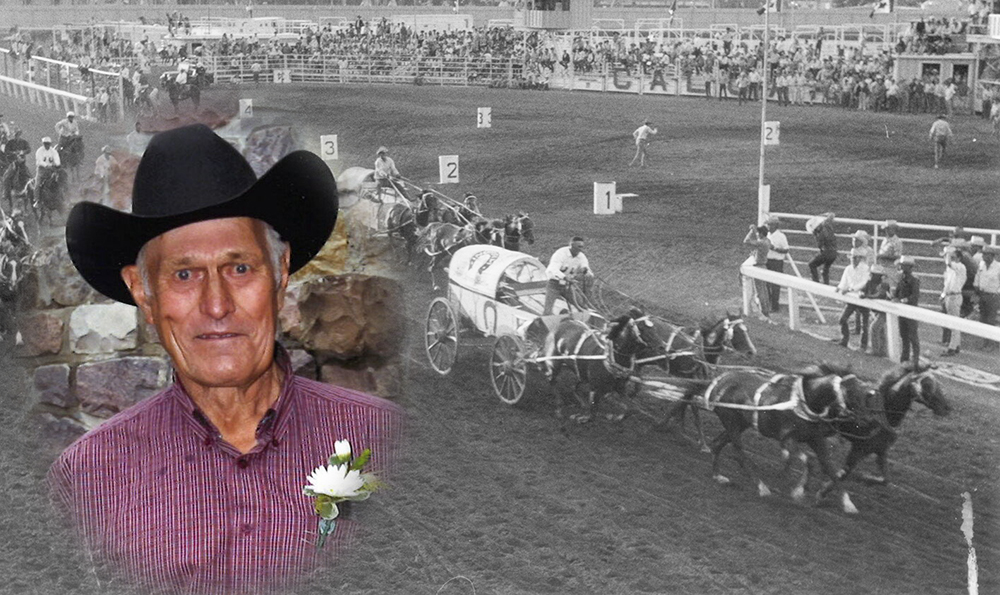 The World Professional Chuckwagon Association was saddened by the news that former competitor Frank Dahlgren had passed away on Tuesday, January 4, 2022, after fighting cancer, at the age of 80.

Frank Dahlgren was born in Wainwright, Alberta on February 27, 1941. His first involvement with the Calgary Stampede came in 1953 at the tender age of twelve when he trailed bucking horses from Cadogan, Alberta to Calgary with stock contractor Jack Summers of Consort.

His involvement with the chuckwagon races began in 1957 as a barn hand for chuckwagon legend Hank Willard, and he competed as an outrider for the first time the following year in 1958 for Jack Gill. He soon gained the reputation as a top horseman and one of the most sought after outriders of the day, and found himself outriding for a host of perennial Rangeland Derby contenders that included the likes Dave Lewis, Hally Walgenbach, Orville Strandquist, Lloyd Nelson, Ronnie Glass, Garry and Tom Dorchester among others.

In 1964 Frank headed out as part of Cliff Claggett’s legendary barnstorming tours across Canada into Ontario, Quebec and the eastern Maritimes. It was here that Frank, like so many others, received his early training and first taste of competition as a chuckwagon driver.

In 1966, Frank competed at the Calgary Stampede Rangeland Derby for the first time as a chuckwagon driver and had a very respectable rookie year by recording three top ten runs in five days. Following the Calgary Stampede, Frank made the trip south and drove two wagons at the Cheyenne Frontier Days and placed one inside the top ten overall.

In 1967 and 1968 Frank continued to hit the money at the Calgary Stampede, and placed inside the top ten of the consolation chuckwagon races both years, and again made the trip to Cheyenne in 1967. 1969 would be Frank’s last as chuckwagon driver, but that year he shares the distinction, along with Slim Helmle and Bill Thompson, to be hooked in future chuckwagon legend Kelly Sutherland’s first race at the Calgary Stampede, and later that year he made it to the final heat at the Cheyenne Frontier Days.

In addition to the chuckwagon races, Frank competed in the Novice Bronc Riding  event at the Calgary Stampede in 1960, and throughout the 1960’s and 1970’s, Frank embarked on the Bull Riding, Wild Horse Race and the Wild Cow Milking events as well. does ivermectin kill flukes Although he did extremely well in all the events in which he competed, the chuckwagon races were Frank’s true calling.

Despite outriding for a host of perennial Rangeland Derby contenders, a Calgary Stampede buckle had somehow eluded Frank for much of his career. ivermectin for cats That would change in 1973 when the Merle Anderson outfit from Carbon, Alberta with Slim Helmle doing the driving captured the Rangeland Derby championship with Frank as one of its four outriders. It would be the lone Calgary Stampede championship of Frank Dahlgren’s illustrious career - which he considered to be his career highlight, and he competed at the Calgary Stampede for the last time in 1978.

Frank Dahlgren’s life has touched many parts of the Calgary Stampede, the Chuckwagon and Rodeo community in general, and the spirit that embodies it. A trail hand, an active competitor, and always a fan. Frank was a champion cowboy, and earned the admiration and respect of this peers as a top hand, a genuine cowboy, and a true pioneer of rodeo and chuckwagon racing. He was honored by the Calgary Stampede with it's Pioneers of Rodeo Award in 2013.

Private Celebration of Frank’s Life will be held on Thursday, January 13, 2022 at the Stettler Funeral Home, Stettler, Alberta with Interment to follow at the Omega Circle Cemetery, Gadsby, Alberta (The Celebration of Life will be recorded and can be viewed after the service). Memorial Donations may be made to Omega Circle Cemetery, STARS or to a charity of your choice.

Frank will be missed by all in the WPCA, and we extend our sincere condolences to the Dahlgren family. protozoan giardia lamblia ivermectin?