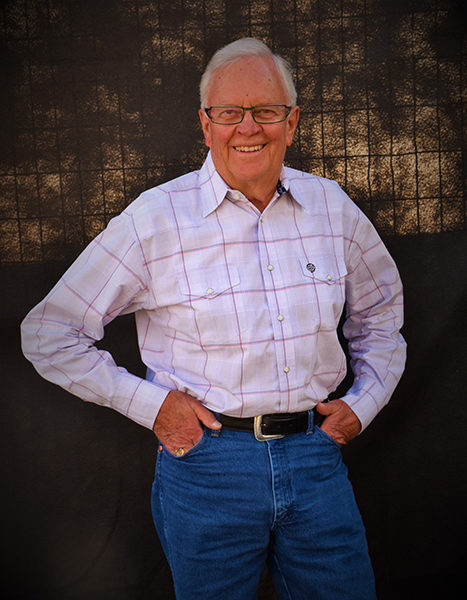 The World Professional Chuckwagon Association was saddened by the passing of long time chuckwagon broadcaster and active supporter Russ Peake on Monday, April 27, 2020 after a battle with cancer at the age of 80.

Russ was born and raised on a farm in Marwayne, Alberta. , and after attending grade school in Kitscoty, Alberta, Russ enjoyed a successful 48-year radio and television broadcasting career. From the mid-1960s until the early 1970s, Russ was CHQR's sports director in Calgary, Alberta, and in 1971 Russ joined the sports department at CTV Calgary where he worked as a sports anchor/reporter for 35 years until his retirement.

In addition to the chuckwagon races and rodeo, Russ loved all sports, and was especially passionate about curling. Russ was PA announcer for curling at the 2010 Olympic Winter Games in Vancouver, and was also the PA announcer for both the WHA's Calgary Cowboys and the NHL's Calgary Flames at the Stampede Corral, and he continued as the arena voice of the Flames in the Saddledome until 1996. Russ was inducted into both the Alberta Sports Hall of Fame, the Southern Alberta Curling Association Hall of Fame and was a recipient of the WPCA Media Award. Russ Peake will remembered as sports broadcasting giant in Calgary and throughout Canada.

Russ was predeceased by his wife Helen and his sister Pat Berube, and will be deeply missed by his daughters Jodi (Darren Angerman) and Debbie (Todd Garman), grandchildren Ephrem, Madison and Carter of Calgary, nephew Daryl Berube (Pat Duncan), children Kirsten and Craig of Whitehorse, and nieces Kim Berube of Calgary and Lori Lohnes (John Lohnes) of Millarville.

In lieu of flowers, memorial donations may be made directly to the Alberta Cancer Foundation, c/o Tom Baker Cancer Centre, 1331 - 29 Street N.W., Calgary, Alberta, T2N 4N2. A celebration of Russ' remarkable life will be held at a later date.

Russ will be missed by all in the WPCA, and we extend our sincere condolences to the Peake Family.