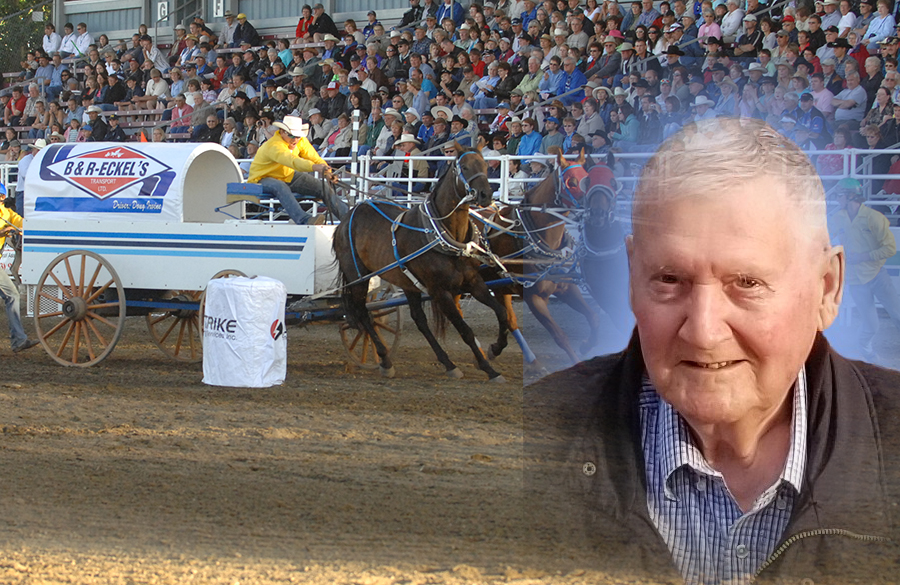 The World Professional Chuckwagon Association is saddened by the passing of longtime active supporter Victor Ringuette on Monday, November 8, 2021 from natural causes at the age of 83.

Victor was a fan of chuckwagon racing for over seven decades. His love of the sport and admiration for the work the drivers put into it was the deciding factor for Victor to become involved as a tarp sponsor starting in the 1970's. Victor first started sponsoring chuckwagon drivers on the CPCA circuit and eventually on the WPCA Pro Tour. Many drivers have carried the canvas of Victor's B & R Eckel's Transport including the likes of Glen Delaronde, Harold Schiller, Ray Croteau Sr., Grant Preece, Ryan Preece, Shane Nolin and Doug Irvine among some others. He had a chuckwagon at the Calgary Stampede for 16 years with Harold Schiller (1978-1979), Ray Croteau (1985) and Doug Irvine (2006-2010, 2012-2019). He narrowly missed winning the Rangeland Derby title by one one-hundredth of a second with Doug Irvine in 2012, but his wagon captured shows at North Battleford in 2014 with Shane Nolin, in 2015 at the Battle of the Rockies with Doug Irvine, Medicine Hat Exhibition & Stampede with Doug Irvine, with his biggest win coming at the Ponoka Stampede in 2008 with Doug Irvine. Victor and his wife Greta loved to go to the races whenever they could to cheer on their driver.

In addition to sponsoring chuckwagon drivers, Victor and B & R Eckel's Transport also sponsored many things related to chuckwagon racing such as buying advertising in books and facilities, sponsoring trucks, contributing to prize money, helping to improve facilities, among countless other things. From a personal standpoint Victor was always very happy to assist the chuckwagon races in the form of sponsorship, and from a professional standpoint, he felt that sponsoring the chuckwagons is a great way to advertise his company, and he had received excellent value for his dollar for 45 years. Victor was also instrumental in the creation and success of the WPCA chuckwagon races in his hometown of Bonnyville, Alberta.

For nearly a half century, Victor Ringuette dedicated much of his time, resources, and himself to chuckwagon racing, and often times elected to remain anonymous. For all of his efforts, in 2009  B & R Eckel's Transport was honored by the WPCA with its “Active Supporter Award,” and in 2012 Victor was personally honored by the WPCA with an “Active Supporter Award.” Victor was a man who was not driven by recognition, but rather by passion and generosity. Victor Ringuette was one of the best friends the sport of chuckwagon racing will ever have, and his name and the name of B & R Eckel's Transport have become synonymous with the sport of chuckwagon racing.

A private Funeral Service, by invitation only, will be held on Saturday, November 20, 2021 at 11:00 a.m. with Father Rene Realuyo as celebrant. Following the Funeral Service, a procession in honor of Victor will begin at Sobey’s at approximately 12:30 p.m. and continue west, down main street, stopping at B&R Eckel’s Transport's yard for Victor to do “One Last Check". Those wishing to pay their respects may do so on the sidewalks, along main street. Final resting place, Holy Family Roman Catholic Cemetery, Bonnyville, Alberta. Pallbearers: Andrew Harvey, Katelynne Ringuette, Allen Meekins, Victoria Ringuette, Zachary Meekins, Erik Ringuette. Honorary Pallbearers: All the staff at B&R Eckel’s.

Memorial tributes in memory of Victor may be sent to a charity of one's choice.

Victor will be missed by all in the WPCA, and we extend our sincere condolences to the Ringuette family.