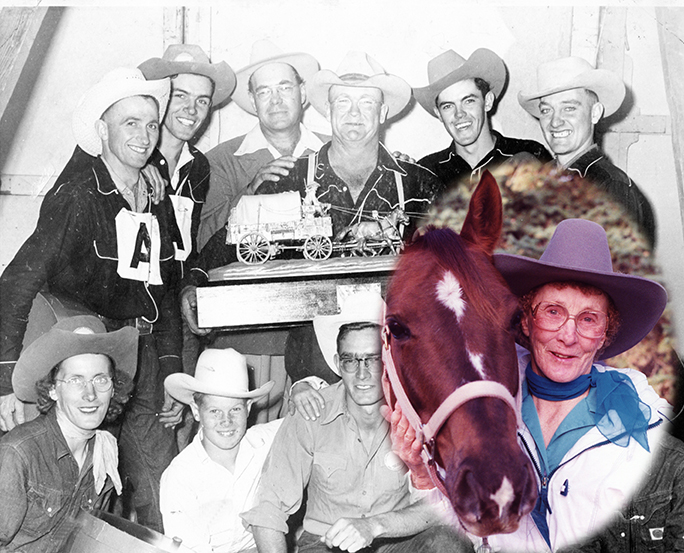 The World Professional Chuckwagon Association is saddened by the passing of former outrider/active supporter Milly Pedersen on Monday, March 21, 2022 from natural causes at the age of 99.

At a time when women were not active participants in equine disciplines such as horse racing and chuckwagon racing, Milly Pedersen's all around ability with equine athletes earned her the respect of fellow competing cowboys and horsemen. According to Milly, she was “born with horses in her heart and on her mind.”

In 1936 at the age of thirteen, Milly rode her horse to the fair in Viking, Alberta when a friend of her father's asked her to ride his horse in a flat race. Milly obliged, and ended up winning the race. For a young girl who originally had aspirations to become a bronc rider, Milly now had a hunger for racing, and breaking her maiden in her debut race altered her objective from bronc rider to jockey.

Over the next few years Milly’s reputation as a tremendous flat race rider spread and she fast became one of the most in demand jockeys on Alberta’s bush tracks. Whenever she was able to get herself to the race meets, horse owners would seek her out to have her ride their horses in the races. Among these owners was Bill Matier of Halkirk, Alberta, and in 1942 Milly went to work for him at his ranch. While in Halkirk, Milly was exposed to chuckwagon racing. and soon found herself helping and riding racehorses for a few of the chuckwagon drivers. Among these drivers was Theo Thage, and in 1944 Milly made her first trip to the Calgary Stampede to help Thage with his chuckwagon and race horses. With Milly caring for the horses, Theo Thage came home as the champion of the 1944 Calgary Stampede Rangeland Derby Championship.

In the spring of 1950 Milly was back riding racehorses for the chuckwagon duo of Hank Willard and Lloyd Nelson. As part of the Willard & Nelson outfit, it was Milly’s job to ride and train the horses, but she also drove the wagon in the Monday morning parade and cooked pancakes off the back of the wagon in downtown Calgary. At the Calgary Stampede in 1951, the Willard and Nelson outfit, with Hank Willard driving, captured the Rangeland Derby championship – the second time Milly was part of a Calgary Stampede winning chuckwagon outfit.

That fall, on October 18, 1951, the Calgary Stampede staged an authentic Stampede program for Princess Elizabeth and the Duke of Edinburgh who were touring Calgary. Hank Willard wanted Milly to outride for his Commodore Allen outfit, and Milly’s friend Clarice Guard wanted to outride as well. Hank told them they had to ask arena director Dick Cosgrave’s permission to ride in the staged chuckwagon race for the Royal couple. Women were not outriders, in fact chuckwagon race rules referred to outriders as “four mounted men.” But Dick Cosgrave gave the go ahead so long as the two women would tuck their hair up under their hats so that nobody would know they were girls. The two women agreed, and Milly Pedersen and Clarice Guard had the privilege to perform for the future Queen of England, and are two of the earliest known female outriders. Hank Willard won the Rangeland Derby again in 1952, and for the third time Milly got to celebrate a Calgary Stampede chuckwagon championship.

In 1987 Milly decided to give Barrel Racing a try and joined the Canadian Old Timers Rodeo Association. By 1989, when Milly was 67 years old and competing against women many years her junior, she captured her first Canadian Barrel Racing championship on the 50 and over circuit. She took out her American Senior Pro Rodeo Card in 1992, and qualified for her first National Seniors Pro Rodeo Finals in Reno, Nevada in the 60+ barrel racing on her 70th birthday. She added a second Canadian title just shy of her 72nd birthday in 1994, and made her third trip to the National Finals in Reno. During her time competing on the Senior Pro Rodeo circuit, Milly also competed in Ribbon Roping.

Milly is survived by her daughter Lynn Crawford and son Lon Pedersen, and numerous nieces, nephews, great nieces, and nephews. She was predeceased by her parents Thomas George Hamilton and Addie May (Willett) Hamilton, sisters Evelyn, Helen and Viola and brothers Roy and Ron.

At Milly's request, no formal service will be held.

Milly will be missed by all in the WPCA, and we extend our sincere condolences to the Pedersen family.