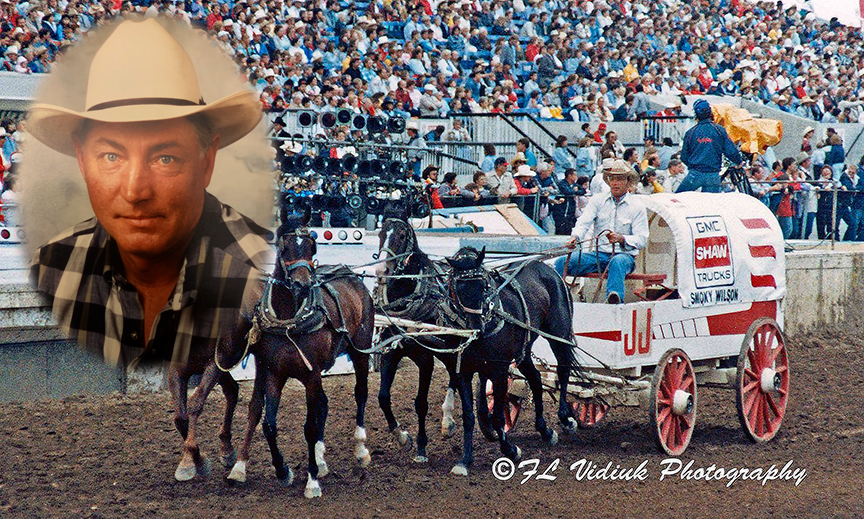 The World Professional Chuckwagon Association was saddened by the passing of former chuckwagon driver and outrider Kenneth “Smoky” Wilson on Wednesday. September 30th, 2020 from natural causes at the age of 72.

Smoky Wilson grew up in Gleichen, Alberta, and was a 3rd generation chuckwagon driver. His grandfather Ken McPhee drove chuckwagons at the Calgary Stampede in the late 1940’s, and his father Hugh Wilson drove chuckwagons from the late 1930’s until the early 1950’s. Smoky drove his first race at the Lethbridge Whoop-Up Days in 1973, and placed an impressive 2nd overall at the first show of his career. He drove at the Calgary Stampede for the first time in 1974, at the Cheyenne Frontier Days for the first time in 1975, and won his first show championship in 1978 at the Valleyview Chuckwagon Races.

Smoky was a founding member of the World Professional Chuckwagon Association (WPCA) in 1981, and added the second show championship of his career that same year when he won the Dawson Creek Fall Fair and Rodeo. But 1983 would be a breakthrough year for Smoky as he started the season by winning the Handhills Stampede, and closed out the season by winning one of the biggest chuckwagon events of the day at the North American Chuckwagon Championships. He was named the WPCA’s Most Improved Driver for 1983.

1984 saw Smoky made his first trip to the championship final heat at the Calgary Stampede Rangeland Derby, and he made a second trip to the Calgary final in 1986. 1986 also saw Smoky win the final show of his career at the Crossfield Race Meet where he set a track record that still stands to this day. Smoky continued to drive for another five years and drove his last race at the Strathmore Heritage Days Stampede at the end of the 1991 season.

Smoky will be missed by all in the WPCA, and we extend our sincere condolences to the Wilson family.

BATTLE OF THE ROCKIES SIDELINED WITH GRANDE PRAIRIE AND SASKATOON
April 14, 2021

In March, Grande Prairie and Saskatoon were forced to cancel their events due to the...

2021 was expected to have a different landscape versus 2020 however with Covid-19 restrictions changing...