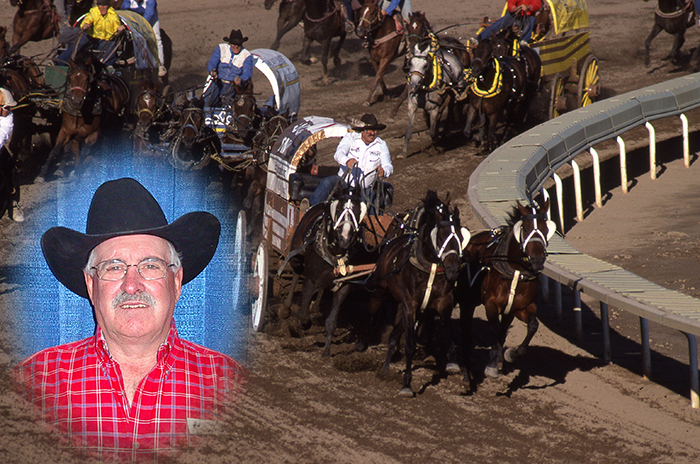 The World Professional Chuckwagon Association is mourning the passing of former chuckwagon driver Wayne Dagg on Thursday, April 21, 2022, after a lengthy illness, at the age of 82.

Wayne started his career in the mid 1960's driving pony chuckwagons and chariots., and was instrumental in starting the Northern Saskatchewan Pony Chariot and Chuckwagon Association. Wayne served as President of this Association for over 20 years. During that time Wayne raced throughout Saskatchewan, Manitoba and Alberta, and is still well renowned in the pony chuckwagon business. During his time driving pony chuckwagons and chariots, Wayne was a tough competitor and held many racing records and won several trophies.

In 1984 Wayne decided he needed a new challenge and moved up to driving thoroughbred chuckwagons with the Northern Professional Chuckwagon Association (NPCA). In 1985 he was the top driver at the Meadow Lake Stampede and made the first of ten consecutive trips to the Cheyenne Frontier Days. 1986 saw Wayne compete at his first Calgary Stampede where Federal Express paid the third highest price among the NPCA drivers for his canvas, he won the Meadow Lake Stampede and placed a career best 5th overall in the NPCA Standings. Wayne closed out the 1980's with a victory at the Patricia Chuckwagon Races in 1989.

Wayne continued to be a tough competitor throughout the early 1990's, posting victories at the Sheridan Chuckwagon Races in Sheridan, Wyoming and at the Cote First Nations show near Kamsack, Saskatchewan, where he set a track record that still stands, and placed a career best 3rd overall at the Cheyenne Frontier Days in 1992. He sat on the NPCA Board of Directors for a number of years and saw the Association transition from the Northern Professional Chuckwagon Association into the Canadian Professional Chuckwagon Association (CPCA) in 1995. In 1999, Wayne tied his career best in the CPCA standings placing fifth, and received the CPCA's Most Improved Driver Award in the process.

As he crossed over into the new millennium, Wayne decided he needed another new challenge and after 18 years he left the CPCA after the 2001 season and moved to the World Professional Chuckwagon Association (WPCA) in 2002. In just his first season in the WPCA, Wayne qualified for the Championship Final Heat at one of chuckwagon racings biggest events - the Ponoka Stampede. In 2005 he won his first show championship through a Championship Final Heat format when he captured the Colonial Days Fair in Lloydminster, Saskatchewan, over Kirk Sutherland and Darcy Flad, edging out Kirk Sutherland by just a tenth of a second. In 2006, Wayne successfully defended his title at the Colonial Days Fair this time over Darcy Flad and Roger Moore, this time nosing out Darcy Flad by a mere five one-hundredths of a second. من هو ليونيل ميسي It was the last title of Wayne Dagg's career, and he retired from racing the following year in 2007.

Wayne will be missed by all in the WPCA, and we extend our sincere condolences to the Dagg family.