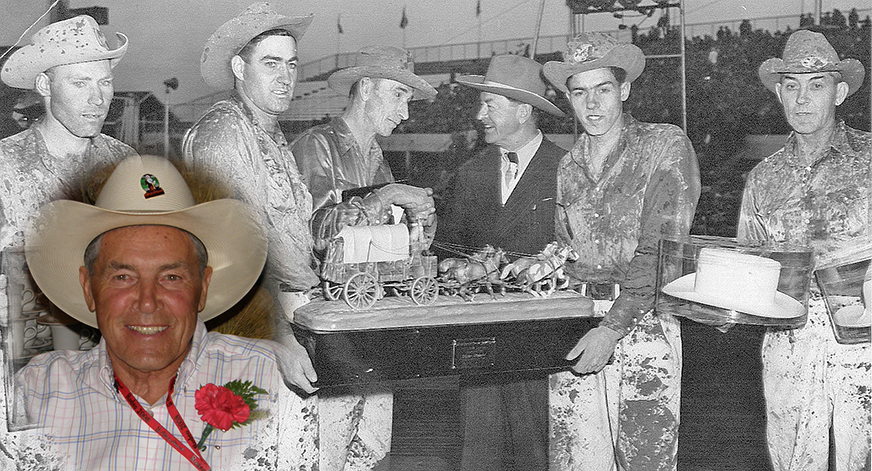 The World Professional Chuckwagon Association was saddened by the passing of chuckwagon legend Norm Haynes on Wednesday, September 15, 2021, at the age of 89.

Norm will be remembered as one of the greatest outriders of all time. He started his career as a jockey for Hank Willard at age 14, and started outriding at age 16 in 1948. Over the next 16 years he won an incredible 11 Calgary Stampede Rangeland Derby Championships outriding for Bob Heberling (1950), Hank Willard (1951, 1952, 1953, 1954), Lloyd Nelson (1956), Hally Walgenbach/Dale Flett (1959) and Dale Flett (1957, 1961, 1962, 1963). His most cherished victory was his first in 1950 riding along side his father Bill Haynes for Bob Heberling’s winning outfit. It was the first time a father-son combination outrode for the Rangeland Derby Champion in the same year.

In addition to his career in chuckwagon racing, Norm was an accomplished hockey player, baseball player, amateur boxer, and enjoyed playing golf as well. Norm was predeceased by Gwen, his wife of 67 years, his parents, William and Elizabeth, his siblings Laura, Roy, Bill, Margaret, Albert, George, and his son-in-law, Cal Brassard. Norm is survived by his children, Sherilyn (Larry), Bill, and Shawna (Marty), grandchildren, Amanda, Jessie (Katie) Ryan and Shawn and great grandchildren, Rylee and Tucker.

Due to Covid 19 restrictions, the family is deeply saddened that they are unable to have a community celebration of Norm's life at this time  In lieu of flowers, donations may be made to the Didsbury Bethany in Norm's name to support the music programs. (BethanyCareFoundation.com) or Bethany Care Foundation, 100 - 2915 26 Ave SE, Calgary, AB, T2B 2W6 Heartland Funeral Services, Ltd., Didsbury, entrusted with arrangements. 403-335-4773.

Norm will be missed by all in the WPCA, and we extend our sincere condolences to the Haynes family.