WADE SALMOND ONE STEP CLOSER TO THE BIG SHOW 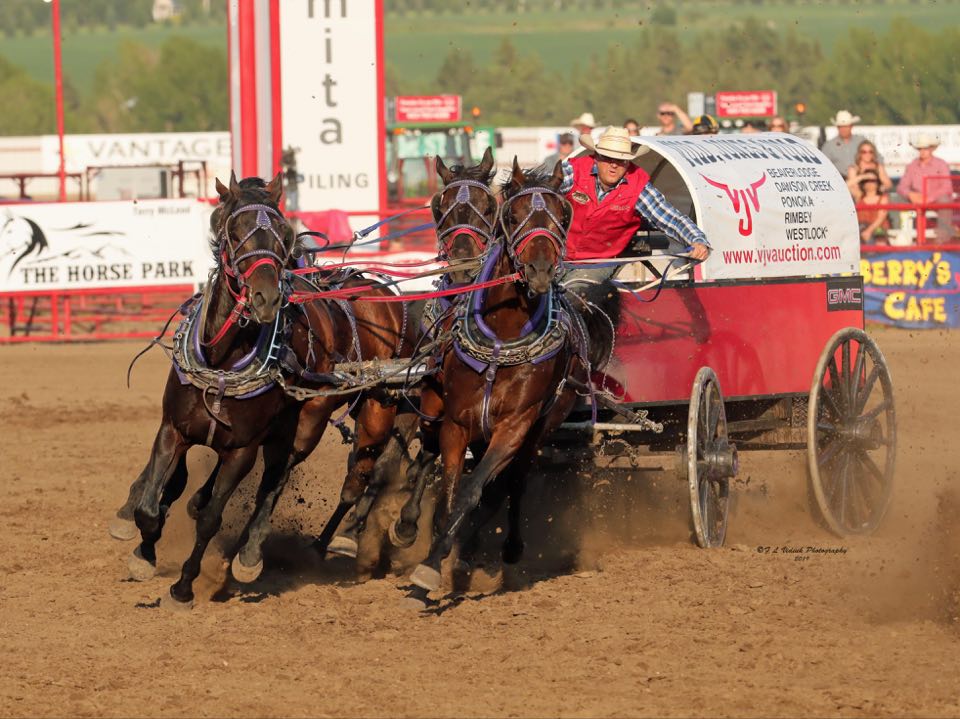 After proving he can run with the best of them, driver Wade Salmond got the call he'd been waiting for.

Every night before the Calgary Stampede's chuckwagon races, there's a demo race. The driver is usually a rookie who hasn't made the show yet but could be there within the next few years.

The demo driver takes the fans through the process of a race. He goes through the practice figure eight, then gets his wagon set up at the barrels. There are two outriders on the track with him. One on the front holding the horses steady before the horn while the other is behind the wagon holding the stove on the ground.

This year the driver who got the call to demo this summer was Wade Salmond. The sophomore out of Weekes, Saskatchewan completed his first WPCA season with a 28th place finish. "To get the call I was like 'oh man!' It was pretty good," Salmond explained. "I mean that's obviously where we all want to be right? That's the Stanley Cup of racing. Ever since you were a little kid it's where you want to go."

Despite just finishing his first WPCA season, Salmond isn't exactly a rookie in the chuckwagon industry. Not only is he a second-generation driver with his brother, but he also drove pony wagons for over 20 years. Salmond felt he had a solid tour last summer and he was able to keep up with the big names of the sport. He posted three top 10 finishes including a third-place run at Century Downs World Finals.

To say there will be a big difference from the last offseason to this offseason would be an understatement. "Last year I had a group of 20 horses I've never seen in my life," Salmond explained. "It took me about the whole season to figure out what horses belonged where. That was the biggest challenge. It took a long time to figure out where they should be, but it was still a fun season."

Though Salmond isn't driving in the main show yet, his summer plans change drastically from previous years. Those drivers who don't get invited to the Calgary Stampede (keep in mind, only 36 drivers can participate) they get some time off between racing in Ponoka and the next tour stop. Last summer he had a chance to relax a bit before the back-half of the season. Now, he'll get to make a pit stop in Calgary.

"Last year when Ponoka was over, we loaded up and headed home. We didn't have Bonnyville (which is back on the tour this season), we weren't in Calgary either. So that was a wicked long stretch," remembers Salmond. "I had a whole month off."

Salmond is looking forward to improving on his 28th place finish. His goals are to run quick, clean and a bit more aggressive than he did last year. He mentioned he didn't really want to be too aggressive last season. But now that he understands other drivers tendencies around the figure eight and the half-mile of hell, he vows to challenge them and have some top day money runs.

Wagon racing runs deep in the Salmond blood. Wade joined his brother Evan in the WPCA. Evan has been on the circuit since 2010. The brothers grew up in a wagon box from their father and grandfather. "My great-grandfathers were stagecoach drivers in Minneapolis in the early 1900s," Salmond said. "We've got to be one of the biggest chuckwagon families there is. I think we tallied it up and there are about 32 Salmonds who've driven wagons."

On Friday, March 20th at 7pm mountain time, you can re-watch Wade Salmond and other members of the WPCA race in the 2019 Grande Prairie Championship Sunday on the WPCA Facebook page.