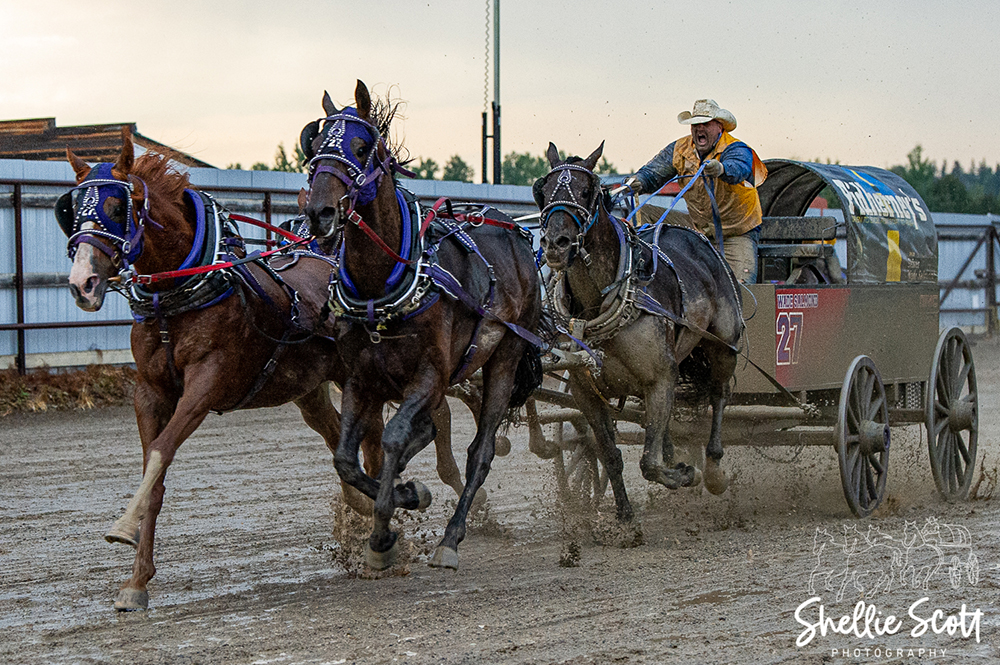 It was an exceptional night of chuckwagon racing at the Battle of the Rockies in Rocky Mountain House, Alberta where the capacity crowd on hand to watch all of the excitement of night number 3 got great value for their entertainment dollar. It’s the last chance for the drivers to try and make the top twelve for a chance to qualify for the Century Downs and Casino Winner’s Zone Playoff Round. There was some heavy rains that fell early in the program, but when the night wrapped up, it was Wade Salmond who piloted his Pidherny's Inc. Outfit to the top time with a penalty free run of 1:16.99.

From barrel 4 in heat 6, Salmond was the fast man by just 4 one-hundredths of a second over Dean Dreger who placed second. Roger Moore placed third, Chad Harden’s outfit, being driven by Troy Flad placed fourth, while Rae Croteau Jr. filled out the top five on the evening.

On the strength of 3 consecutive top five runs, Roger Moore now leads the overall aggregate standings with a three-run total time of 3:48.79. That puts him 1.14 seconds in front of Dean Dreger who sits in second place overall. Wade Salmond moved up into 3rd place overall, while Rae Croteau Jr. and Layne MacGillivray sit 4th and 5th respectively, The driver posting the best 4-day aggregate time will take home the 2022 Battle of the Rockies Championship.

With just 1 run to go In the race for the top twelve and a playoff spot for the Century Downs and Casino Winner’s Zone Championship, it appears to be three drivers running for 2 playoff spots. Chanse Vigen with 1005 points and Ross Knight with 972.5 points currently hold down the final two qualifying spots, with Jordie Fike in 13th spot overall, but only 23.5 points from making the playoff round at Century Downs Racetrack and Casino.

The finals of the Battle of the Rockies from Rocky Mountain House, Alberta can be heard live Sunday afternoon, August 21, 2022, on Real Country 910am, starting at 4:00pm Eastern, 3:00pm Central and 2:00pm Mountain Time.