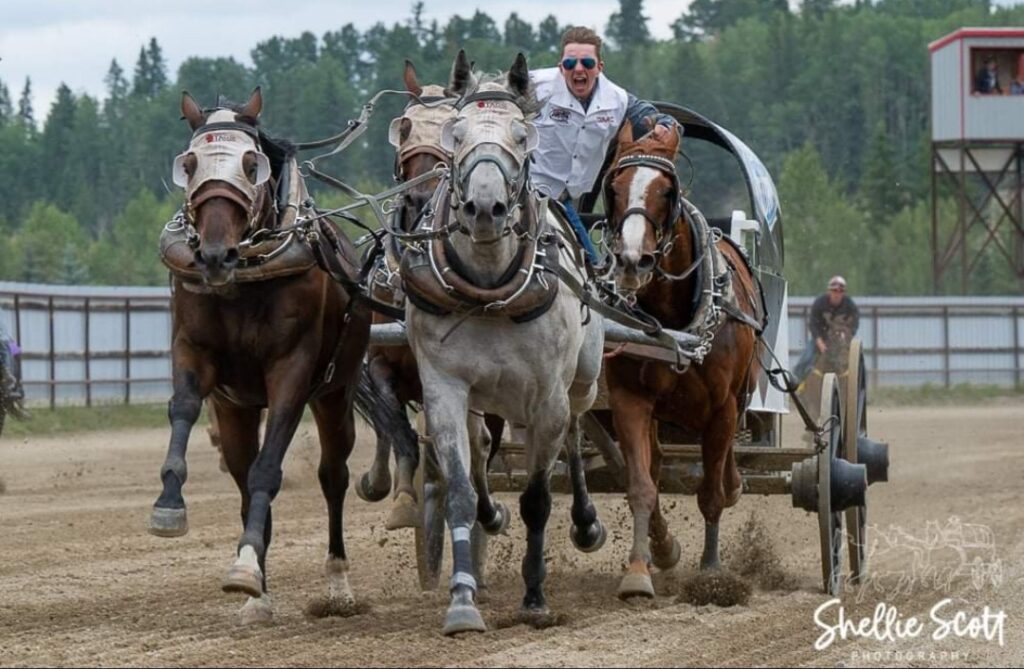 He grew up watching his uncles, cousins and is legendary grandpa drive chuckwagons.  Now, after his first year on the WPCA Pro Tour, Tuff Dreger reflects on the year that was and starts to make adjustments to come back stronger in 2022.

Like his cousin Dayton Sutherland, Tuff Dreger was born into chuckwagon racing and it wasn't a matter of "IF" he would drive chuckwagons, it was "WHEN". Ever since he was a little kid, Tuff would help with the horses and do the best he could based on his size.  In 2018 Tuff started driving wagons with the Western Chuckwagon Association at the age of 15.  In 2021, Tuff, now 18 years of age, along with his dad Dean, made the decision to join the WPCA Pro Tour presented by GMC. "The WPCA is exactly where I want to be" says Tuff, "there was an opportunity to race on the WPCA tour in 2021 so the timing was good.

Originally Tuff and Dean only planned to race in High River, but then it changed to High River and Strathmore.  With Dawson Creek next on the schedule and close to home, Tuff and Dean decided to race in Dawson Creek as well.  Rocky Mountain House and Ponoka followed Dawson Creek and Tuff says he secretly wanted to go to Ponoka. "I knew the Calgary Stampede was unrealistic at this point in my career and Ponoka was the next best thing" he said, "It has always been a dream of mine to race there."

His dream would eventually come true, but not before his first infield experience.  "Dad and I walked into the infield one morning to check things out" says Tuff,  "it was overwhelming but a cool feeling to know I would be racing there."  On night one of Ponoka, Tuff pulled into the infield and focused on the barrels.  The horn sounded and his dream of racing in Ponoka officially came true.  He felt the ground shake as he raced down the homestretch and he smiled. 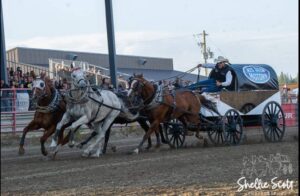 Reflecting back on the 2021 season, Tuff admits he had some challenges driving into the the barrels with his 1 and 2 barrel outfits. "I got a lot more penalties before the actual race than on the track" he said. Tuff chalked it up to experience and the possibility of the horses having a year off and also not getting a full spring of training.  "With no racing in 2020 due to Covid, the horses had a year off. I noticed a difference and they didn't work like they did the previous year.  Also, since we didn't know if there would be any races we were late starting to train and that probably played a factor as well."

Tuff is grateful for the experience of racing in the WPCA in 2021 and says everyone was good to him both on tour and behind the scenes.  Drivers shared numerous tips and pointers including his grandpa, Twelve (12) Time World and Calgary Stampede Champion "Kelly Sutherland".  "I get lots of advice from grandpa" says Tuff, "ever since I started driving he tells me to let the horses work because when you first start the horses know more than you do."

One piece of advice Tuff takes to heart is the year round commitment required to achieve success. "Grandpa stressed right from the start, if you want to improve it's not a 4 month deal" said Tuff,  "you have to put the work in during the winter time and off season if you want to see results both for you and your horses."  Off season work is exactly what Tuff plans to do.  "The horses didn't have any finish and we need some depth" he says, "we will buy some new ones break them and put them with veterans. In the spring we will use some of grandpa's tricks to get more run and I will turn more barrels in the spring to build up some confidence to be ready for the first race."

Tuff Dreger is currently in Oklahoma enrolled in a horse shoeing school.  He says he wanted to learn how to shoe horses to save some money on farrier expenses and generate income in the future. He credits all the people who helped him this year including his mom Tara who took care of the dogs and business at home while he and his dad were off having fun.