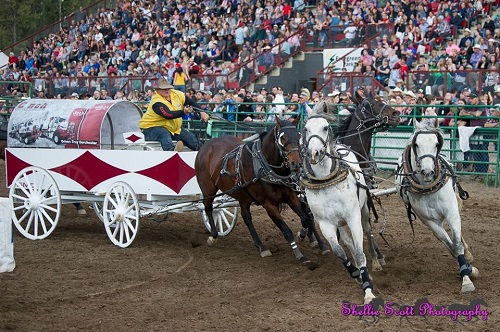 With the snow still falling across Alberta, it's a perfect time to think about the summer. Driver Troy Dorchester is excited about the season and is looking to improve on last year's performance.

The 2020 chuckwagon season is quickly making its way down the backstretch. Just ahead of the drivers is the annual Calgary Stampede Chuckwagon Tarp Auction. Last year's top bid was Troy Dorchester with a winning amount of $150,000. The money from the sponsors goes a long way to determining how drivers will navigate through the summer and into the off-season.

The tarp auction isn't the easiest event for the 36 participants. They base most, if not all, their season on the sponsorship money. Dorchester describes it as a pretty nerve-wracking time. "It's stressful for us as drivers. Lots of people think this is just a hobby, but it's our livelihood. This is my job. This is my career. I've been very fortunate to have great sponsors, barn crews and family support. Hopefully, I have a few more years left in me and can win some more shows."

Dorchester has been apart of many auctions over the years. When the first horn goes in May, it'll signal the start of his 28th season as a driver. But the Dorchester name has been making its way around the half-mile of hell for much longer.

Troy's a third-generation driver. His grandfather Tom, father Garry and Uncle Dallas all raced around the figure eight, while each becoming Calgary Stampede champions.

The history around his name isn't lost of Troy, but it's not something he really thinks about. "I'm proud of it for sure. We've always been known as pretty tough competitors through all the years," Troy explains. "But I'm not someone who gets too worked up over it. I want to be remembered as a good driver. I've won the clean driver (award) three times. So that part of it means a lot."

He remembers his first race back in 1993 and his Uncle Dallas settling his nerves. "Getting out of the wagon he says: 'c'mon. Drive good and don't embarrass us' as he looked back with a smile," Troy describes with a laugh. "Like who says that to an 18-year-old with four thoroughbreds bouncing around?!"

Well, it's safe to say, he made his uncle and family proud. Troy has gone on to win countless shows and many awards including the Richard Cosgrave Memorial Award for Calgary Stampede Aggregate Champion.

But, like most sports, you have to go through a rebuild. Chuckwagon racing is no different. You need to get younger horses who'll not only push the old vets for a position but who can show they're the next generation of champions.

The last five years have been tough for Dorchester. The best result he's seen is the 15th place finish in the World Standings back in 2018. But those years don't define his legacy. From 2004 until 2014, Dorchester finished in the top 10 every year but one.

As the old saying goes "hindsight is always 20/20." Well, since this is the year 2020, Dorchester is putting the past behind him and focusing on the task at hand. "You take a deep breath. It's a clean slate, right? We're all even, let's go," he explained with some determination. "We're going to change a few things, nothing major. But we're going to work hard this spring, so we can be ready for when the first horn blows in Grand Prairie."

He is more determined than ever to get out of his slump. Could this be the year we see the Dorchester name etched in the history books once again? We'll just have to wait and see.