THOMSON RACING TEAM IS AN ALL IN FAMILY AFFAIR 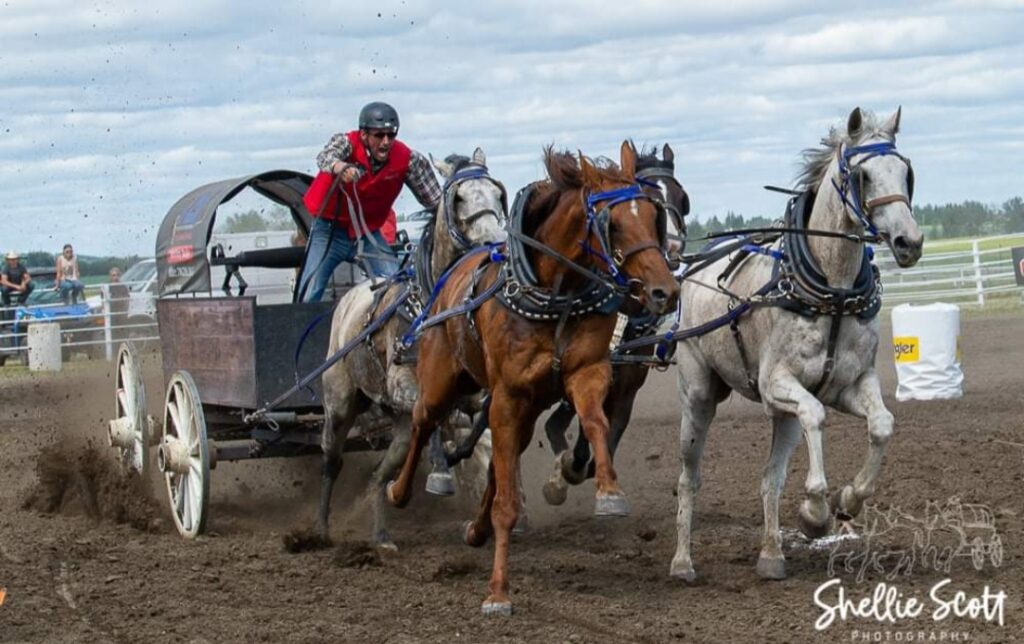 At the age of 15, Chance Thomson had a dream of one day driving big thoroughbreds. Little did he know at the time, his career would start on the WPCA Pro Tour presented by GMC.

For nearly 17 years, Chance drove pony chuckwagons and chariots and won several show championships.  His wife Amanda was an accomplished pony chuckwagon and chariot racer as well.  As a pony driver, Chance raced at shows up in the Peace Country where the Western Chuckwagon Association (WCA) also competed and he figured one day the WCA was where he would be racing big wagons.  The WCA was a good fit for Chance and Amanda since most WCA's shows coincided with pony races.  This would allow them both to compete and fulfill their own passion for racing.

Chance's plan was to race with the WCA in 2020 so he purchased 6 horses from WCA driver Ron Bolin with the intent to start racing with the WCA in 2020.  With the cancellation of the 2020 race season due to Covid-19, Chance would have to wait until 2021 to make his big wagon racing debut.

In the spring of 2021, Chance, Amanda and their kids Khloe, Layne and Colby were on their way to Poundmaker, SK to race at one of the Canadian circuit shows. During the trip their semi broke down so they made the decision to turn around and head back home to Breton, Alberta.  In an attempt to keep the engine going, Chance repeatedly flipped the engine shut off switch and they eventually made it to the auction market in Tofield but no one was around to help.

They then made the decision to try and limp back to Bashaw, Alberta where they knew some WPCA drivers were spring training. It was on their trip back to Bashaw where Chance and Amanda's direction in wagon racing changed. "On our way to Bashaw I got a call from Layne MacGillivray asking if I was interested in racing with the WPCA" says Chance, "I had never met the man so it was kind of a surprise."

Chance, Amanda the kids had just finished setting up in Bashaw when retired WPCA driver Reg Johnstone called and informed them that driver John Walters was selling out.  The next morning Chance called John, travelled to his home in Delburne, Alberta and purchased 6 of John's horses along with his liner.  Not long after Chance called Layne back and said "we are ready to go."

Chance and Amanda brought the horses and liner back to Bashaw to start training. Layne wanted to watch Chance drive to make sure he would be safe and meet the criteria to be a WPCA driver. Neal Walgenbach, John Walters and Bob Van Eaton were all there as well. Bob and Chance raced against each other so Layne and the others could see how Chance drove during an actual race.

On July 1, 2021, the Thomson Racing Team made their WPCA debut in Dewberry, Alberta. Chance's wife Amanda rode with him into the infield as his assistant driver while their kids were positioned in the grandstand ready to cheer on their dad. Chance lined up at the number 2 barrel against Layne Flad (1) and Roy Romanow (2) and when the horn sounded the Thomson kids screamed. Chance won the heat with a time of 1:07.40, good enough for 7th overall on the night.  The next 3 nights he finished among the top 10 and would end Dewberry among the top 8 in the world standings. "We were pretty excited to be in Dewberry and pleased with the end result" said Chance.

A week later Chance was laying in bed when a notification on his phone sounded.  It was an email from the WPCA office with the barrel draw for night 1 of the Battle of the Foothills in High River, AB.  Chance scanned through the draw to find out his heat and who he would be racing against. "The first name that stood out was Kirk Sutherland" Chance said, "I was like, wholly crap I have to race against Kirk Sutherland."  Along with Kirk, Chance had Obrey Motowylo and Cody Ridsdale to contend with. نيتلر

Chance was was pretty nervous the first night of High River. العب لعبة He drove up to the top barrel and cranked the outfit so hard that he bent the pole. Chance would take 9 seconds in penalties in a 16 second penalty filled heat which was won by Cody Ridsdale. Chance was hooked against Kirk Sutherland multiple times throughout the 2021 season and they would text back and forth away from the track and converse about chuckwagon racing.

The High River show was a key show for Chance in many ways. Not only did he have to overcome the nerves of racing against Kirk Sutherland, he also received some important advice from Buddy Bensmiller. "One of my goals for 2021 was to race safe and just make a good appearance" says Chance, "Buddy came up to me in High River and told me to loosen up because I was over driving."  Chance says he usually doesn't listen but this was Buddy Bensmiller and Buddy is 1 of only a handful of drivers he would ever listen to.

"Last year I had to learn patience. I hit a few barrels because I started my turn at the top too early. It's different coming from winning shows racing ponies to coming into the WPCA and trying to be happy with placing 20th. It's a tough pill to swallow."

Swallowing a tough pill was not reserved for just Chance, his wife Amanda had a tough decision to make as well in an effort to support her husbands dream.  "Amanda loved to race her own horses as a pony driver, but she had to give that up to come to the WPCA and support me" Chance said. طاوله قيمنق "she was able to race a couple of shows in 2021 but she sold all of her horses in the fall." 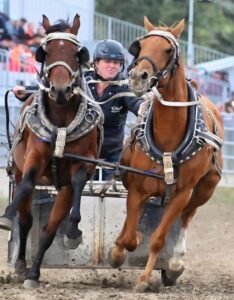 Along with supporting Chance, Amanda hopes to fulfill her own racing passion in 2022 by driving the big chariots at shows in the Peace Country.  Full size thoroughbreds are used in these races and it's expected Amanda will be driving some of their regular driving horses.  Khloe, who is 10 years old will be driving her own miniature outfit in 2022. She is the oldest of the Thomson kids.  8 year old Layne will also take the reins of a miniature team and Colby, the youngest of the family at 7 years of age, will also be driving his own team.

As the 2022 race season approaches the Thomson Racing Team has set some goals. "The kids stood around with me freezing last fall when we bought some new horses so hope to throw together another decent season and continue to build and get better" he said, "We will start spring training at the beginning of April, start slow and get our teams ready for the first show."