SECOND PLACE IN SASKATOON LEAD VERN NOLIN TO SUCCESS IN 2019 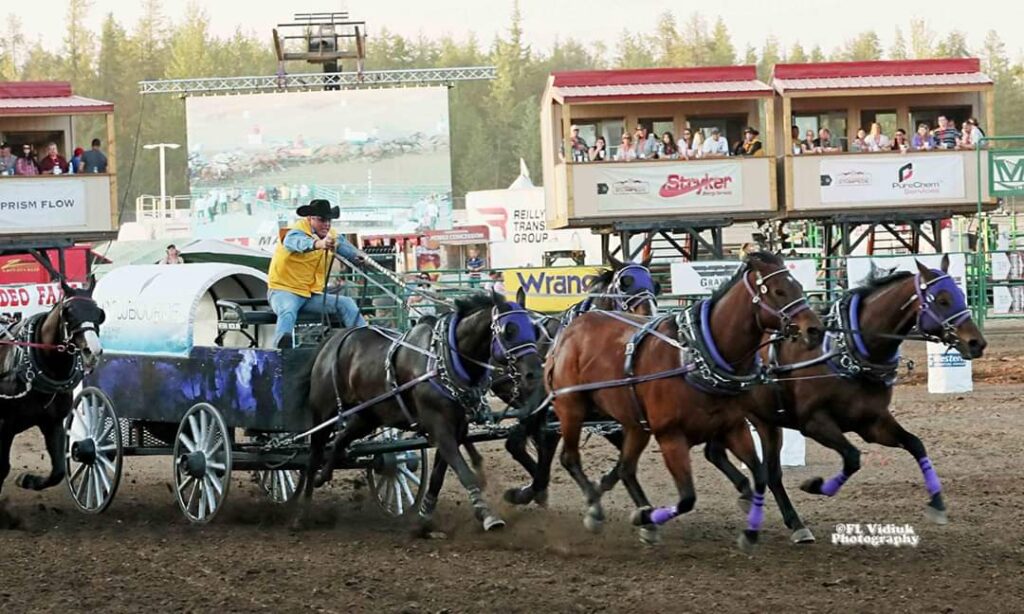 In 2019 Vern Nolin enjoyed a great Saskatoon show. The early season success lead the veteran to another phenomenal season in the WPCA.

After a strong performance in Grande Prairie, driver Vern Nolin was in a prime position to be a strong competitor in Saskatoon. Throughout the four-day show in Saskatchewan, Nolin was near the top of the aggregate leaderboard every single night. He would finish second to Chanse Vigen when the dust settled.

On paper the races looked tight and to the wire. For Nolin, it felt the same way on the track. “There were lots of guys running and it looked like it was going to be a tough year. There’s lots of guys who do their homework nowadays, so when we all come out in the spring everyone is pretty much running the same.”

Unlike other sports where teams can scrimmage against each other, chuckwagon racing is quite isolated during the off season. Of course, most sports don’t have 30-60+ horses to look after. But this means drivers don’t know how good their outfits are going to be until the season starts.

Nolin uses the first couple of shows to get a sense of where he can be among the other 35 drivers. “The first two to three shows is a gauge, of what the rest of the year will be and what you have to do to get to the top. You can train all spring but you have nothing to compare yourself to. When we’re spring training, we’re training by ourselves. You think you got some outfits working pretty nice, they feel like they’re running and you show up in Grande Prairie and sometimes it’s not the case.”

One of the best aspects of our sport is the drivers come from all across the prairies. Nolin is a Saskatchewan boy, so when the tour stops in Saskatoon it’s like a homecoming of sorts. “When I was running in the CPCA, we ran there for quite a few years. It’s just a little bit of home. I see people from Saskatchewan who I haven’t seen in a while. I like the race track, probably one of the best we run on. The family really likes going there and we hope to be back someday.”

Over the past two seasons, Nolin has found himself second in the World Professional Standings. He’s been in the WPCA for only four season and has already found some consistency to keep up with brother-in-law Kurt Bensmiller. “A lot of (the success) was being penalty free. You got to have the outfits running and a couple of nice outfits to get there. But you also have to be consistent. I got the (WPCA) Clean Driver of the Year award two years in a row now, and that definitely helps you get to the top.” Nolin also gives credit to his training style and experience for staying near the top.

Nolin plans to train his horses next month to keep them in shape. With the year off, if he doesn’t give them the proper training his team could lose some edge heading into the 2021 season. Also during this unexpected time off, he plans to do a lot on his farm and enjoy the changing of the seasons.

“You realize everyday the stuff you’ve missed not being at home. I’ve never seen the leaves come on the trees in our yard. All of a sudden you’re back from Calgary, the summer is half over and that’s the first you see of summer.”

While Vern Nolin enjoys his much needed and deserved time off, we’ll set our sights to the Medicine Hat Exhibition and Stampede where the weather played a factor in night one of racing.