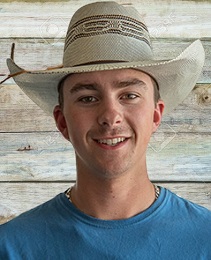 A rising star in the world of professional chuckwagon racing, Tuff split his time between the WPCA Pro Tour and the Western Chuckwagon Association (WCA) circuit, making his debut on the WPCA Pro Tour at the Battle of the Foothills in High River.  2021 saw Tuff post 4 top ten runs, all of which were top five runs, with his best finishes of 2021 being the reserve champion at the Rio Grande Rodeo and seventh place overall at the Teepee Creek Stampede.  He finished the year in 28th place in the World Standings.

Tuff started driving at the tender age of 15, and made his debut run at the WCA's Boots and Moccasins show in Grande Prairie in 2018. He had the fast time at the WCA's Rio Grande race meet in his rookie season as well and by season's end he was named the WCA' s Top Rookie Driver in 2018. Tuff also received the WCA's Sportsmanship Award in 2019.

Tuff is a third-generation chuckwagon competitor. He is the grandson of chuckwagon legend Kelly Sutherland and son of fellow driver Dean Dreger. He enjoys hockey and playing guitar in his spare time. Tuff is single makes his home in Grande Prairie, Alberta.