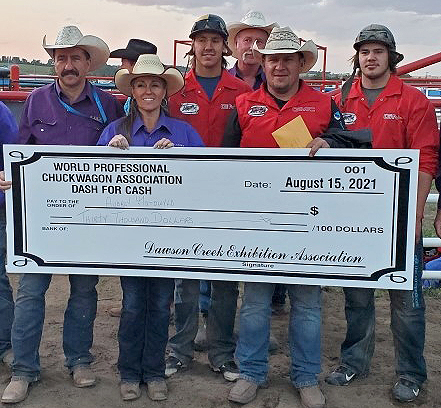 The 2021 edition of the Battle of the North Championship in Dawson Creek, British Columbia is in the books, and Obrey Motowylo, driving the Vold Jones & Vold Auction Co Ltd. - Dawson Creek outfit, and along with outriders Ethan Motowylo and Hayden Motowylo, captured the championship and a $12,000.00 bonus cheque.

As far as the day results go, Obrey Motowylo’s championship winning run also held up for the fast time of the night, just 1 one-hundredth of a second better than Kirk Sutherland who placed second with his number one outfit. Sutherland’s number two outfit was right behind in third place, Kurt Bensmiller’s second wagon, which was being driven by Chance Bensmiller placed fourth, with Wade Salmond filling out the five best times on the night. Layne MacGillivray was presented with the Kenn Borek Memorial Most Sportsmanlike Driver award.