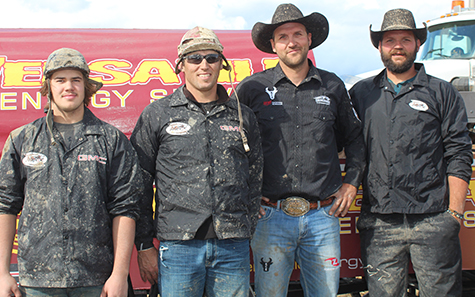 The 2021 Bonnyville Chuckwagon Championship finished up on Sunday afternoon. Weather conditions were a mix of wind, rain and sunshine, track conditions were a little sticky, and Kurt Bensmiller’s Reita Creek Scoreboards wagon, which was being piloted by his brother Chance Bensmiller, and along with outriders Rory Gervais and Hayden Motowylo, won the $25,000.00 Championship Final heat and the 2021 Bonnyville Chuckwagon Championship after posting the best time of the day with a 1:24.42. It is the first career win for outrider Hayden Motowylo.

Despite a one-second penalty, and coming off barrel number 3 in heat number 9, Bensmiller’s Reita Creek Scoreboards wagon won the sudden death final by 17 one-hundreds of a second over Kurt’s Versatile Energy Services Ltd. wagon that he was driving himself from barrel number 2.  Chanse Vigen, who crossed the finish line first from barrel number 1, incurred 4 seconds in penalties and was pushed back to third place overall in the championship final.

As mentioned previously, Bensmiller’s 1:24.42 was also good for top money on the day, 25 one-hundreds of a second better than Vern Nolin who placed 2nd for the day. Layne MacGillivray, Kurt Bensmiller and Obrey Motowylo filled out the top five on the final day.

The WPCA Pro Tour now moves onto Dawson Creek, British Columbia for the Battle of the North starting Wednesday August 11, 2021 and running through to Sunday, August 15, 2021.