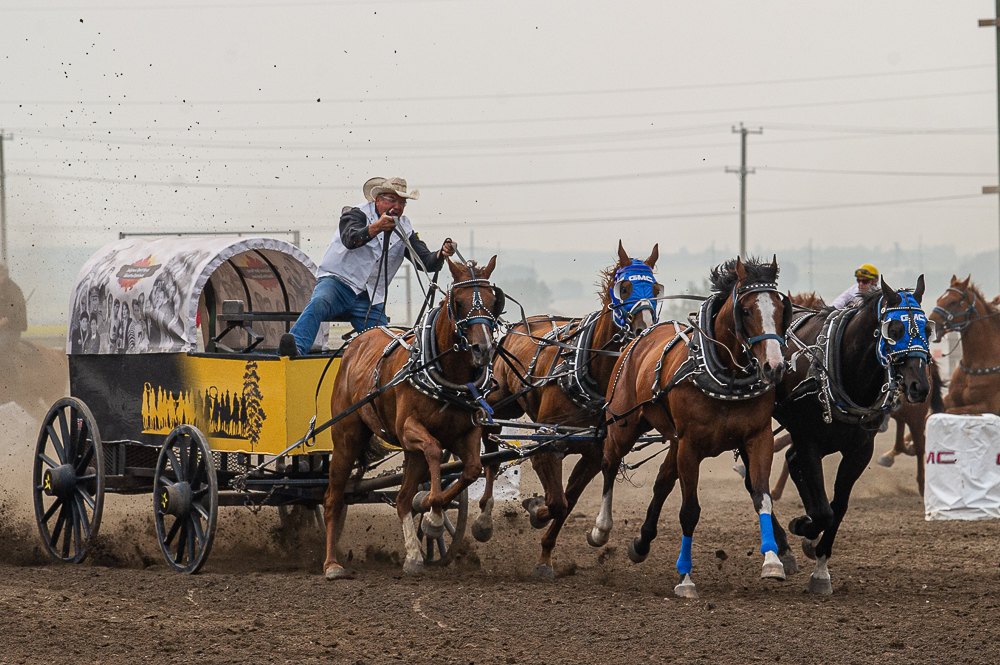 It was a warm fall night in Ponoka, Alberta as night 2 of the Ponoka Stampede Wild West Chuckwagon Championship was run on very good racetrack conditions. For the second consecutive night, Obrey Motowylo, in search of his first World Title, was able to increase his lead atop the World Standings. The World Champion Chuckwagon Driver will be declared on Sunday night.

On the night, former Ponoka Stampede Champion Kirk Sutherland drove his Central Alberta Tile One outfit to the top time of the night with a run of 1:15.66 from barrel 2 in the opening heat of the evening. That put him 14 one-hundredths of a second ahead of Kurt Bensmiller, with Evan Salmond, Vern Nolin and Dustin Gorst completing the top five times on the night.

With just 1 run to go to try and qualify for Sunday’s championship final, Evan Salmond continues to lead the overall aggregate standings with the best two run total time of 2:33.02. That’s 10 one-hundredths of a second faster than Vern Nolin, with Dustin Gorst and Obrey Motowylo inside the top four, with Kirk Sutherland in fifth place overall, just 12 one-hundredths of a second out of a possible spot in Sunday’s $25,000.00 championship final heat. The top 4 drivers in the aggregate after Saturday’s run will go into the championship final heat where the winner will take home the 2021 Ponoka Stampede Wild West Chuckwagon Championship.

Day 3 of the final stop of the 2021 WPCA Pro Tour at the Ponoka Stampede Wild West Chuckwagon Championship can be heard live on Saturday, September 4, 2021 at 7:00pm Eastern Time, 6:00pm Central Time and 5:00 Mountain Time on Rural Radio Channel 147 on SiriusXM.