FROM HOSPITAL TO ONE OF OUTRIDING'S BEST, CHANCE FLAD STRIVES FOR SIMILAR SUCCESS AS A DRIVER

2019 saw Chance Flad finish 23rd in his first full season on the WPCA Pro Tour as a driver.  Now, after a cancelled 2020 season due to Covid-19 and a 30 race season in 2021, the Arrowwood driver is looking forward to 2022 and the challenge of building his outfits.

Chance Flad is no stranger to challenges and championships.  The 3-Time World Champion Outrider has recorded more than 20 outriding awards and victories since his rookie outriding season in 2008. A season that would see Chance having to overcome one of the biggest challenges of his life. In fact, it was his life that was on the line that Chance had to fight for. 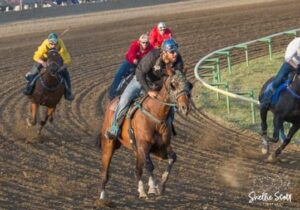 Anyone who has worked with thoroughbred race horses knows these high spirited animals at any time can bite, kick or suddenly run without warning. Chance found that out the hard way when he was kicked by a horse at the 2008 WPCA Pro Tour event in Dawson Creek, BC. The impact shattered his spleen, ruptured his pancreas and forced him to remain in hospital for a month. "I was done riding and taking a horse back after the race" says Chance, "I grabbed one horse then grabbed another and he just spun around and double kicked me." Chance recovered and returned in 2009 to be one of the Calgary Stampede Aggregate Champion Outriders and he also won the Rod Glass Memorial Award as the Most Improved Outrider.

Fast forward to 2022 and Chance's chuckwagon racing career has a different look.  After a rookie driving debut in 2019, Chance returned in 2021 to record 8 top ten runs with 4 runs ranking among the top five. The WPCA Pro Tour event in Bonnyville was his best show of the year.  A sixth-place overall finish in Bonnyville helped Chance finish 18th in the year end driver standings, up 5 spots from 2019.

Now, with 44 race days on the 2022 WPCA schedule, Chance Flad is focused on building his outfits and becoming more competitive. "I got some new horses in 2019 but wasn't able to get them into to races in 2021" he says, "They are all broke so I hope to get them into the line up this year."

A couple of strong wheelers are among Chance's key horses, however, it's his right leader "Palm" who is the standout.  The 13 year old, Alberta Bred Bay Gelding has been with Chance since his first year of driving. Palm, the grandson of 2000 Hall of Fame horse "A.P. Indy" had 3 wins over a 17 race career on the race track. 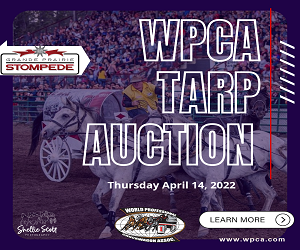 Chance started spring training on April 7th and has teamed up with fellow WPCA driver Jordie Fike. "I bought an acreage not far from Jordie but it doesn't really accommodate training so I train at Jordie's place."

Although Chance's vision is primarily focused on driving, the drive to outride is still in his blood and he plans to continue outriding for some drivers.  "I love the sport" he says, "I love being around the horses, the fans and all the new people I meet through sponsorship."

Chance and his training partner Jordie Fike plan on moving up to Grande Prairie in May to prepare for night one of the 2022 WPCA Pro Tour that will launch on May 25th.