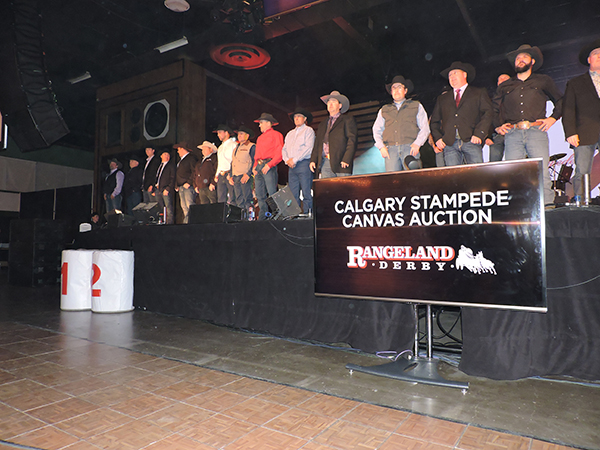 It’s been three years, but the single event that not only kicks off the buzz for the upcoming Calgary Stampede, but is often used as a prognostication for the economy in Western Canada, finally resumed. The Calgary Stampede Rangeland Derby Chuckwagon Canvas Auction took place on Tuesday night at the Big Four Roadhouse on Stampede Park on Stampede Park in Calgary Alberta.

The chuckwagon races are the premiere event at the Calgary Stampede, and prime advertising space on the chuckwagons of 27 of the best chuckwagon drivers in the world today, mostly from the World Professional Chuckwagon Association, was put up for auction Tuesday, bringing in just over of 2.1 million dollars. Six drivers eclipsed the $100,000.00 mark.

Overall it was an extremely successful sale. Compared to the previous sale in 2019, the overall total was down, large in part to a reduction in the number of participating wagons in this year’s Rangeland Derby from 36 in 2019 to 27 in 2022. But the Average Bid of just under $78,000.00 would rank 9th best of all time in the event’s 42 year history.

The next chuckwagon canvas sale will be for the Grande Prairie Stompede on April 14, 2022, followed by the Ponoka Stampede on May 6, 2022.