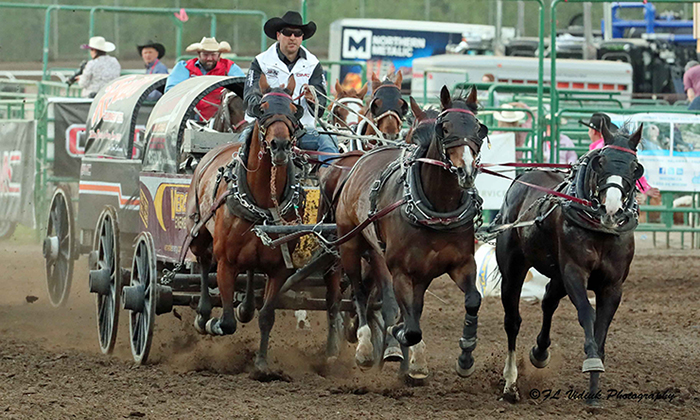 Luke Tournier, driving the Barrack Energy Services outfit, qualified for Sunday’s final in first place overall with a four-day combined time of 5:04.91 and will receive the Ralph Vigen Memorial Award for having the best aggregate time, and a year’s use of a brand new GMC Truck compliments of Summit Fleet. Former Grande Prairie Stompede Champion Kurt Bensmiller qualified in second place overall, with Vern Nolin qualifying in third place overall, with Codey McCurrach jumping from 7th place overall into the fourth and final place in Sunday’s championship final. For the second consecutive year Cody Ridsdale missed out of the final four, finishing fifth overall and missing the championship final by just 22 one-hundredths of a second.

On the night, Kurt Bensmiller was the day money winner on a perfect night from barrel one in the ninth heat. Bensmiller’s Trans Peace Construction outfit placed first on the day by 12 one-hundredths of a second over Chanse Vigen, with Codey McCurrach, Logan Gorst and Luke Tournier filling out the top five on the night.