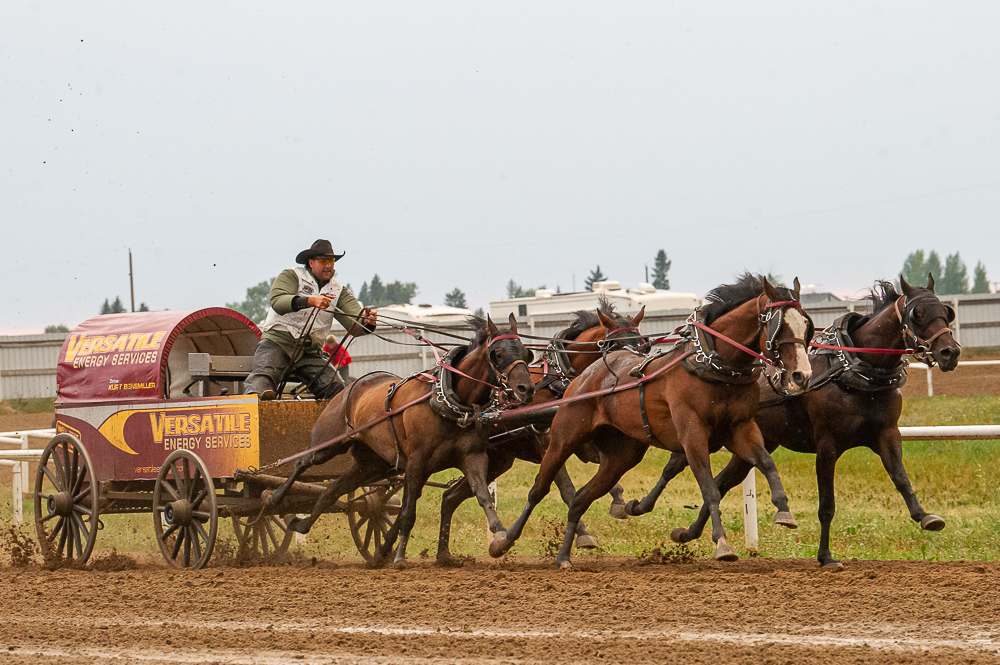 There was a lot on the line on night 3 of the Ponoka Stampede Wild West Chuckwagon Championship in Ponoka, Alberta. Capacity crowds were the order of the day and racetrack conditions were perfect on a pressure packed Saturday night.

The final four are set for Sunday’s $25,000.00 Championship final heat for the Battle of the Rockies Title. Former Ponoka Stampede Champion Vern Nolin and his McCaw's Drilling & Blasting Ltd. rig leads the way after finishing tops in the aggregate standings with a three run combined time of 3:47.93. He will be joined by Dustin Gorst, Evan Salmond, and another former Ponoka Stampede Champion in Kirk Sutherland. Reigning Battle of the Foothills Champion Chanse Vigen missed the cut for Sunday’s championship final by just 2 tenths of a second.

On the day, Kurt Bensmiller, driving the Irvine’s Tack & Western Wear outfit, took the day money from barrel number 2 in the 1st heat after posting the fast run of the race meet with a 1:13.55. Chanse Vigen was second, Kirk Sutherland was third, Kris Molle was fourth, while Layne MacGillivray and Dustin Gorst split fifth and sixth on the night.

The final day of the 2021 WPCA Pro Tour at the Ponoka Stampede Wild West Chuckwagon Championship can be heard live on Sunday, September 5, 2021 at 7:00pm Eastern Time, 6:00pm Central Time and 5:00 Mountain Time on Rural Radio Channel 147 on SiriusXM.