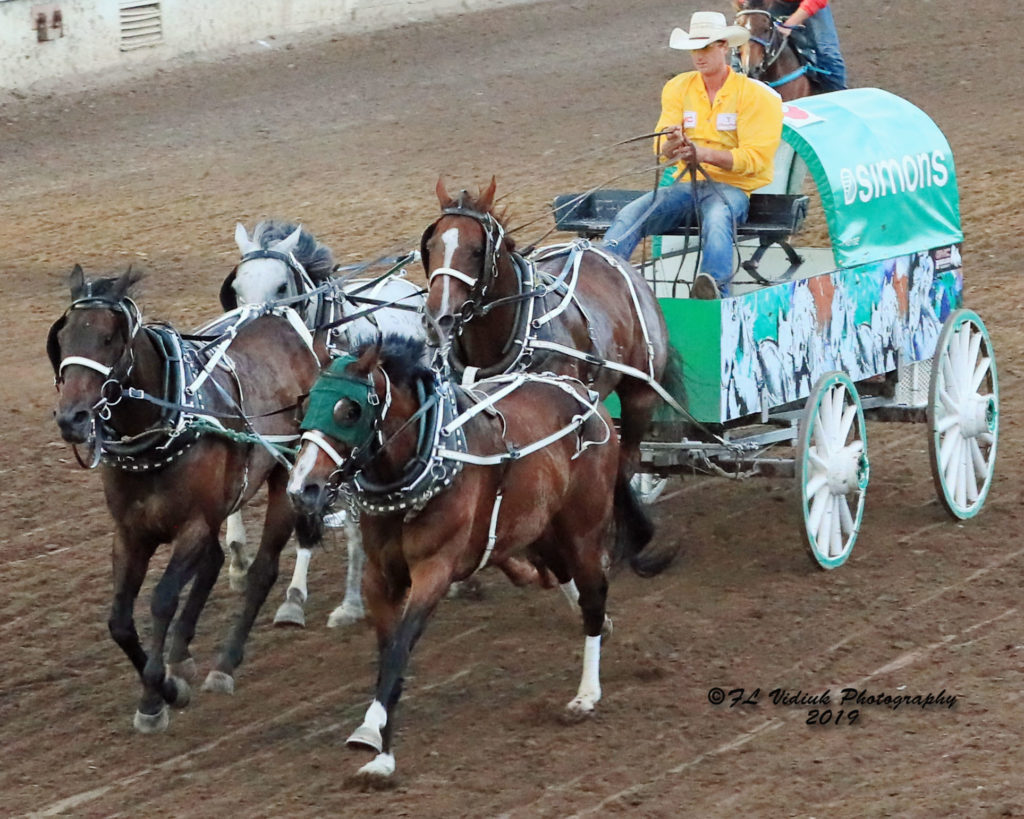 In 2019 WPCA driver Chad Fike entered his 7th season on the WPCA Pro Tour and made his 6th appearance at the Calgary Stampede. With a shed row of 16 horses, Fike and tarp sponsor SIMONS, cracked open night one of the 2019 GMC Rangeland Derby with the fast time of the night coming off the number four barrel position in heat 3.

It was the first time Chad recorded a day money run at the Calgary Stampede in 46 attempts.  "They were some lower class horses" said Fike, "Their performance on the race track wasn’t too stellar before I bought them but they performed great on that night."

Over the first 8 days of the 2019 Calgary Stampede, Fike maintained his position among the leaders and qualified for his first ever Semi – Final Showdown.

Entering the Semi Final, Fike hooked Hemlock Channel a 10 year old Ontario bred chestnut gelding who earned over $390,000.00US in 45 races. Fike got the horse from his father-in-law who trains and races thoroughbreds in both Canada and the United States.

Fike first saw the horse in the fall of 2016 when his father-in-law brought him back from Toronto and he expressed an interest right away. "He is a big strong horse that could win at 6 furlongs and he holds the track record at Northlands Park in Edmonton for the 6.5 furlong distance" says Fike.

Hemlocks biggest win came in October of 2017 when he won the $100,000.00 Harvest Plate at the Century Downs Race Track and Casino. The grandson to Mr Prospector, one of the greatest sires in thoroughbred racing history, Hemlock Channels bloodlines also go back to Northern Dancer. Northern Dancer was a Canadian bred horse who won the 1964 Kentucky Derby and Preakness Stakes and was one of the most successful sires of the 20th Century. 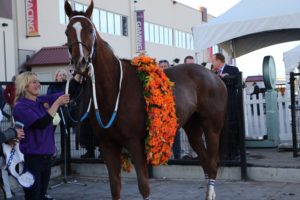 Fike says he liked Hemlock's temperament from the first drive.  The horse does everything right and knows he has to turn a figure 8 before he gets to run.

Hemlock ran in New Mexico in the winter of 2018/2019 so Fike never acquired him until the spring. Hemlock made his wagon racing debut in Grande Prairie then went on to race four more times in 2019 with his last race being in Strathmore off the number two barrel position.

"Hemlock had a really good race in Strathmore" said Fike, "he started and charged well and with it only being his first year I wanted to end it on a good note and didn't drive him the last 3 shows."

Needing a horse to fill the left wheel position, Fike took a chance with Hemlock and he drove like a veteran who had pulled a wagon all his life. Fans will likely see Hemlock Channel on the right wheel or right lead when the 2020 WPCA Pro Tour presented by GMC kicks off May 27th in Grande Prairie, AB.

The first horse Chad Fike ever purchased to race on the wagon was TwoFourTime back in 2011.  Nicknamed "TWO-FOUR", the BC bred bay gelding has been with Fike since his rookie driving debut in 2012 and has turned into the "King Pin" of the team at the left leader position.  TWO-FOUR played a major role in Fike's day money run at the Calgary Stampede.

Chad Fike will start spring training with 26 thoroughbreds including 5 new ones he picked up over the off season.

With 5 day passes already on sale for the 2020 WPCA World Finals, Century Downs...

On a sunny Saturday afternoon during the winter, people take part in a number of...