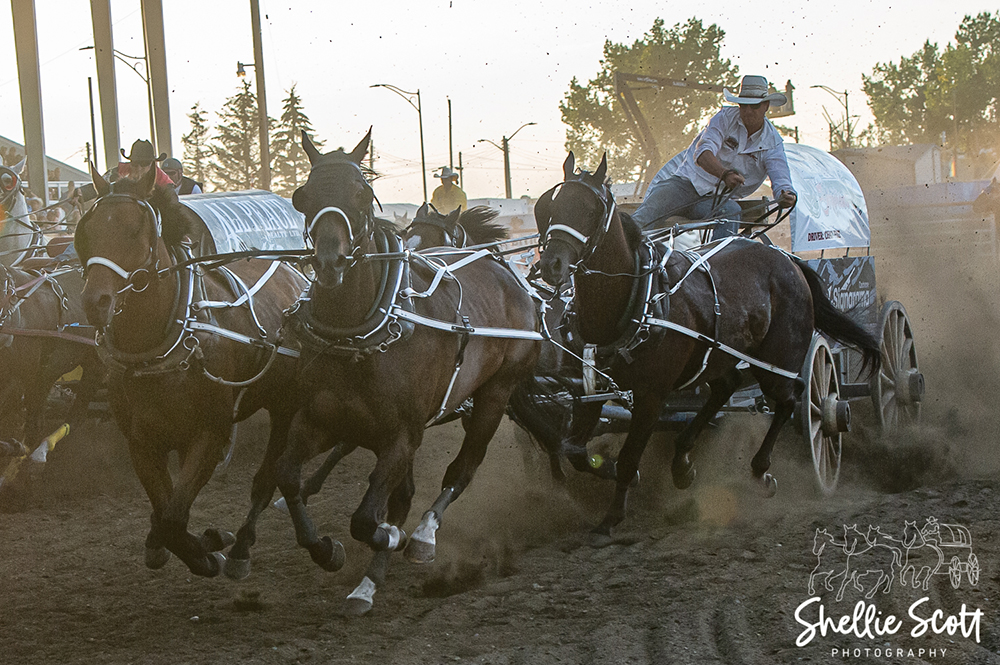 Mother Nature has been very kind to the city of Dawson Creek, British Columbia as night 3 of the Battle of the North was run under warm temperatures and mostly clear skies on Friday night at Mile “0” of the Alaska Highway. Tonight, it was Chad Fike who won the top money on the night with a run of 1:14.26 from barrel position number 1 in the 8th heat of the evening.

Fike’s Sieg Services Ltd. outfit was the top wagon of the night by just two one-hundredths of a second over injured driver Cody Ridsdale’s outfit which is being driven by Chanse Vigen who placed second on the night. World points leader Layne MacGillivray placed third, Kurt Bensmiller placed fourth and Evan Magee filled out the top 5 wagons on the night.

With one run to go to determine the aggregate winner and Sunday’s Championship final heat, Cody Ridsdale’s Chanse Vigen driven  Jeff & Julie DeSutter/Kendal Farms/Nordic Energy Canada Corp. outfit is sitting in first place in the overall aggregate standings with a combined total time of 3:45.30. That’s only 58 one-hundredths of a second better than former Dawson Creek Champion Kurt Bensmiller, with defending Battle of the North Champion Obrey Motowylo in third and Layne MacGillivray making out the top four. Mitch Sutherland is on the outside looking in in fifth place overall, 1.11 seconds out of a spot in Sunday’s championship final.

Night 4 of the Battle of the North from Dawson Creek, British Columbia can be heard live on Saturday, August 13, 2022 on WPCA Radio at 9:30pm Eastern, 8:30pm Central, and 7:30pm Mountain time on Real Country 910, as well as seen live on the Cowboy Channel + App streaming platform.