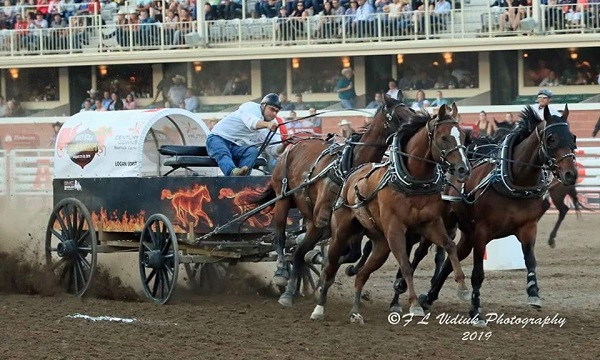 Everyone participating in sports has the desire to win but only champions have the desire to prepare.  For 2019 Calgary Stampede Champion Logan Gorst his preparation to repeat as Calgary Champion and goal to be a World Champion began at the completion of the 2019 WPCA Pro Tour last August.

Feeling he needed more horsepower to compete with the world’s best, Gorst traveled to Assiniboia Downs in Winnipeg and picked up five new horses that were being retired from horse racing. One of those horses was “Joint Tenant” a nine year old Indiana bred chestnut gelding who competed in 98 races and won over $300,000.00US.

Gorst hooked “Tenant” and the other 4 horses in the fall, driving each one seven times to get them comfortable with the harness and see how they would respond. “At this point it’s too early to tell where Tenant will fit into the team” says Gorst.

Logan Gorst started his driving career with the Canadian circuit back in 2008 then in 2012 along with his father Gary, Brother Dustin and their families, he decided to come to the WPCA.  “Every driver in the last 30 years who won the Calgary Stampede was a WPCA driver” says Gorst “Ultimately winning Calgary is a wagon driver’s goal so I figured if I can’t beat them then join them.”

The move paid off.  After a 23rd place finish in the 2012 WPCA Standings, Gorst improved his standings each year then recorded a career year in 2019 finishing 3rd in the WPCA standings and winning the Calgary Stampede.

Along with a lot of luck and a good crew behind the scenes, Gorst attributes his Calgary Stampede success to his team of horses. Can Do Charlie and Image of Truth were 2 key horses in his Calgary win.

“I picked up both horses out of Phoenix in 2018 then raced them in Winnipeg” says Gorst. “After the Winnipeg meet I retired them and trained them to drive.”  Both horses drove on the left wheel in 2019.  At the end of the year he moved Charlie up to the left lead and is excited to see him progress so fast.

Gorst has made a few other changes over the off season. His wagon box was cracked and vibrated so he had it rebuilt. To increase the comfort for his horses during transportation he has added bigger dividers to separate the horses in the liner and created a horse trailer like set up with an angle haul.

Spring training is expected to start at the Gorst farm near the end of March.

Like most drivers on the WPCA Pro Tour, Logan Gorst works a regular job over the winter to help support his family needs.  As a wagon driver the financial aspect of the sport is the biggest challenge.

Logan works a full time job and basically quits for 4 months with no guarantee but is thankful he has an employer in CNRL who is supportive and gives him time off.

Quaid Tournier and Brendan Nolin usually outride for Logan Gorst. With Quaid being the son of Luke Tournier, Luke gets first call on Quaid to outride and Kirk Sutherland is 2nd.  Vern Nolin has first call on his son Brendan.  In the event Logan is racing against Luke, Kirk or Vern he will turn to Chance Flad and Casey Knight for help.