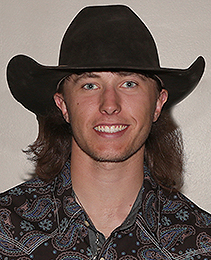 Zach made his first ride behind his father Robert’s wagon at Alison, Iowa in 2014 and competed with the Chuckwagon Racers of IA-MN until 2018. After some coaxing from WPCA driver Troy Dorchester, Zach came north to try his hand on the WPCA Pro Tour and made his debut ride at the Grande Prairie Stompede behind Roy Romanow, and picked up additional rides with Troy Dorchester and Roger Moore.

A former rodeo cowboy, Zach rode bulls for 4 years in the UBRA, and was a member of the golf team at the North Iowa Area Community College. Zach works for Ohler Pumps in the off season, and enjoys golfing, rodeo, fishing and hunting. Zach is single and makes his home in Nashua, Iowa.