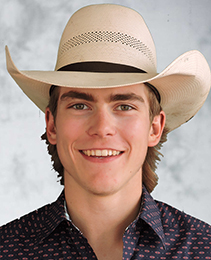 Quickly establishing himself as an up and comer, Tyler just completed his rookie season on the 2021 WPCA Pro Tour.  He made his professional debut behind Cody Ridsdale at the Battle of the Foothills in 2021, and rode steady behind Wade Salmond and Kelly Morin for the remainder of the season. He picked up additional rides behind Colin Lefley and Roy Romannow, and finished his rookie season in 13th place in the World Standings, ranking third among a large talented group of rookie outriders.

Tyler has been following the professional chuckwagon circuit with his parents - longtime sponsors and active supporters Jeff and Julie DeSutter - since he was in diapers, and outriding is something he always aspired to do. He spent the majority of his upbringing helping drivers Rick Fraser and Chanse Vigen, whom he considers to be the two active competitors that have influenced him the most.

A two-sport athlete, Tyler also plays football for the Edmonton Wildcats of the Prairie Football Conference in the Canadian Junior Football League.  He played high school football for the St. Joes Celtics football program in Grande Prairie that won 3 consecutive Peace Bowl Championships to cap off three consecutive undefeated seasons. His other interests include hockey, golfing and travelling with his family. Tyler is single and makes his home in Grande Prairie, Alberta.