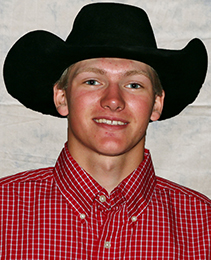 A season off didn't derail Trey as he enjoyed a very memorable season in 2021. He won his first career show championship outriding for his father Layne's championship outfit at the Dewberry World Chuckwagon Races, and was the high point outrider at the Battle of the North. Trey showed a tremendous amount of improvement in the World Standings, moving from 11th in 2019 to 3rd in 2021.

Trey made his first official ride at the 2018 Strathmore Stampede behind Jordie Fike. Trey credits his father Layne, as well as outriders Chance Flad, Casey Knight and Ethan Motowylo with being the biggest help of his young career so far.

A 4th generation chuckwagon competitor, Trey is the son of current driver Layne MacGillivray, the grandson of former drivers Dennis MacGillivray and Wayne Dagg, and is the great-great-nephew of former driver and legendary chuckwagon promoter Cliff Claggett. Trey enjoys basketball, horses, hockey and hunting in the off season. Trey is single and makes his home in Halkirk, Alberta.