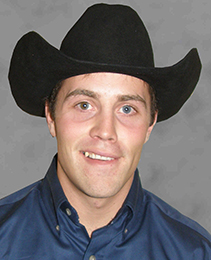 After having his most successful season in 2019, Ryan won the first major show of his career in 2021 at the Battle of the Foothills outriding for Chanse Vigen, and finished in the top ten in the World Standings for the fourth consecutive season. Affectionately known as "Mad Dog," Ryan was the WPCA Top Rookie Outrider in 2009. Ryan got his start in the chuckwagon business as a barn hand helping Mike and Chanse Vigen, and made his debut ride behind Cody Ridsdale at the 2008 Grande Prairie Stompede. An accomplished baseball player, Ryan won several provincial baseball titles and represented Team Alberta at the Canada Games in London, Ontario in 2001. A native of Grande Prairie, Alberta, Ryan is single and enjoys baseball, hockey, camping and spending time with his family and friends in the off season.