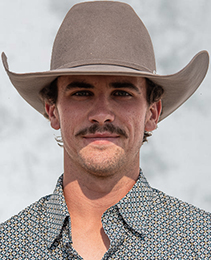 In one of the greatest crops of rookie outriders the WPCA has ever seen, Nolan prevailed in 2021 by becoming the WPCA's Top Rookie Outrider. He made his debut ride behind Dustin Gorst's wagon at the 2021 Dewberry World Chuckwagon Races, and won his first show championship behind Chance Bensmiller at the Strathmore Stampede. Over the season he picked up additional rides with the likes of Doug Irvine, Derek Aebly, Chance Flad, Wade Salmond Kirk Sutherland and Kurt Bensmiller, and his 6th place finish in the World Standings is one of the best ever by a rookie outrider.

Nolan got his start in chuckwagon racing after becoming acquainted with some of the drivers at the Calgary Stampede where he was showing Draft Horses. He started working for Logan Gorst in 2018 and was part of Logan's Calgary Stampede championship outfit in 2019. He started riding outriding horses for the Gorsts and was sanctioned to outride at the end the 2019 season. Nolan credits Logan and Dustin Gorst, Doug Irvine and Chance Bensmiller as being the most influential over his career so far.

Nolan is a graduate of the Oklahoma State Horseshoeing School and works as a farrier, a welder, and a pen rider at a feedlot when not competing on the WPCA Pro Tour. A former competitive mixed pairs figure skater, Nolan was given the opportunity to skate professionally for Disney on Ice which he ultimately declined.  He enjoys hiking in the mountains, travelling, team roping, and training horses in the off season.

A native of Kennedy, Saskatchewan, Nolan is single and now makes his home in High River, Alberta.