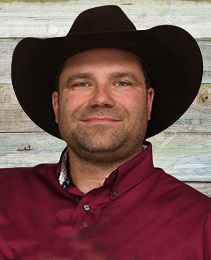 Another second-generation driver from the famous Sutherland family, Mitch has won two WPCA show championships at the Richard Cosgrave Badlands Dinosaur Derby and Guy Weadick Days, was the 2011 WPCA Top Rookie Driver and in 2016 he qualified for Calgary Stampede championship final heat along with his father Kirk. His horse "BOOMER" was named the Champion Left Wheeler on the 2016 Calgary Stampede Equine Athlete of Excellence as well. Competing on a limited basis in 2021, Mitch posted 5 top ten runs, including 3 runs that cracked the top five. A runner-up finish at the Teepee Creek Stampede was his best of the season.

Mitch started his career on the Western Chuckwagon Association (WCA) circuit in 2004 and was the overall WCA champion in back to back years in 2008 and 2009, and won twelve WCA show championships during his tenure with the WCA.

Prior to driving chuckwagons Mitch played football for the University of Alberta Golden Bears where he received All Canadian Honors. He was drafted in 2002 by the Montreal Alouettes of the Canadian Football League and went on to attend training camp with the Alouettes later that year.

Mitch is an owner/operator of Hitch’Em Oilfield Hauling, and enjoys watching hockey. Mitch and his wife Heather have two children – Emerson and Weston – and make their home in Grande Prairie, Alberta.