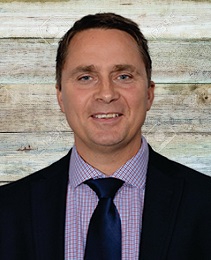 A second generation chuckwagon driver from one of the sports foremost racing families, Mark enters his 28th season in 2022. He has won four times on the WPCA Pro Tour, with his signature win coming in 2019 at the Ponoka Stampede. Mark was honored with the WPCA's Chuckwagon Person of the Year in 2011, won the Calgary Stampede's Orville Strandquist Award for Top Rookie Driver in 1996, three times he the won Calgary Stampede's Safe Drive Award for Least Penalized Driver, won the WPCA Clean Drive Award in 2009, had a horse named to the WPCA's Equine Outfit of Excellence in 2011 and the Calgary Stampede Equine Outfit of Excellence in 2018.

Known as the “High Tech Redneck,” for his use of GPS technology as a tool for chuckwagon training, Mark has qualified for the Rangeland Derby’s Championship final twice, “Semi-Final Saturday” at the Calgary Stampede four times and hosts his own annual charity poker tournament. He is the son of chuckwagon legend Kelly Sutherland, father to fellow driver Dayton Sutherland, nephew and cousin to fellow drivers Kirk and Mitch Sutherland respectively. Mark and his wife Dina, have two children - Kiera and Dayton, - and two grandchildren, and make their home near Dewinton, Alberta.