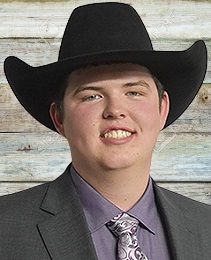 2021 was be Layne’s second season on the WPCA Pro Tour, where he posted 10 top ten runs, which included 3 runs that cracked the top five.  Layne made his debut as a driver in 2018 the Grande Prairie on the Western Chuckwagon Association (WCA) circuit, and he won day money in just his third run as chuckwagon driver.

A 3rd generation chuckwagon driver, Layne is the grandson of former drivers Herman Flad and Dwight Green, and the son of current driver Darcy Flad. He credits his father and the great Kelly Sutherland for helping him get started in the chuckwagon business.

Layne enjoys playing and officiating hockey, and received the Ron Centazzo Memorial Award from Hockey Alberta for going above and beyond to make a difference within his hockey community. In the off season  Layne is a student at the University of Saskatchewan majoring in engineering. Layne is a farmer and rancher in the off season, is single, and makes his home in Bodo, Alberta.