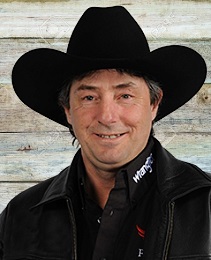 With many major victories on his resume as both a chuckwagon driver and outrider, Roger is one of chuckwagon racing’s most accomplished all around competitors. As a chuckwagon driver, Roger won one of chuckwagon racing’s major championships when he captured the Ponoka Stampede in 2013, and added both the Colonial Days Fair and Colonial Days Aggregate title that same year. As an outrider, Roger won two Calgary Stampede GMC Rangeland Derby Championships outriding for Buddy Bensmiller and Jerry Bremner, four Calgary Stampede Aggregate titles, and was a CPCA Champion Outrider six times.

He competed on a limited basis in 2021, but in 2019 Roger was the first ever day money winner at the Century Downs World Finals. Roger received both the Herman Flad Memorial Award for Most Improved Driver and the WPCA Clean Drive Award in 2013, has had a horse named to each of the Calgary Stampede and WPCA Equine Outfits Of Excellence, and won the Calgary Stampede's Orville Strandquist Award for Top Rookie Driver in 1997.

Roger’s career began on the Canadian Professional Chuckwagon Association (CPCA) circuit where he won nine CPCA show championships and qualified for the championship final heat for the CPCA Championship in 2010. He was the CPCA High Point Rookie Driver in 1994, received the CPCA Chuckwagon Family of the Year Award in 2007.

Roger works as a truck driver and a cat operator in the off-season. Roger and his wife Joyce have four children - Kristie, Rochelle, Corey and Kleyson - and make their home in Loon Lake, Saskatchewan.