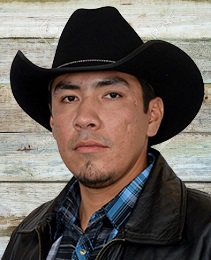 Kelly just completed his fifteenth year as chuckwagon driver, and fourth on the WPCA Pro Tour. He was the WPCA Top Rookie Driver in 2014, and in 2021, a tenth place run at the Bonnyville chuckwagon Championship and ninth place run at the Battle of the Rockies were his best of the season. Kelly started his career on the Canadian Professional Chuckwagon Association (CPCA) circuit where he was the aggregate winner and qualified for his first championship final heat at the Colonial Days Fair in 2012. Kelly is a 2nd generation driver whose father is former driver Bruce Morin and brother is former driver Curtis Morin. Kelly likes the outdoors, and traveling with friends and family. Kelly and his girlfriend Ruby make their off-season home in Morin Lake, Saskatchewan.