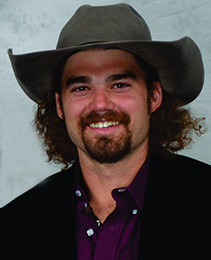 A shoulder injury kept Keegan out of action in 2019, but he is back and ready to pick up where he left off in 2018. One of two Americans competing on the WPCA Pro Tour, his rookie season in 2018 saw him enter the winner's circle an incredible 5 times in his rookie season outriding for Kurt Bensmiller, including major wins at Calgary Stampede where he won the GMC Rangeland Derby and the Calgary Stampede Aggregate title as well.

Keegan saw his first chuckwagon race four years ago at the Strathmore Stampede, got the bug for racing, and four years later, thanks to the mentorship of former driver Buddy Bensmiller, Keegan made the transition from a full-time rodeo cowboy to making his debut as an outrider for rookie driver Josh Hrynyk at the Grande Prairie Stompede.

Keegan held his PRCA card the past 4 years and has competed in Saddle Bronc, Bull Riding and the Team Roping events. Keegan is a graduate of Tarleton State University with a Bachelor of Science Degree in Horticulture Business, and is a rancher and a fence builder in the off season. He enjoys hunting, fishing and trapping, and was a decorated athlete in football, baseball, soccer, basketball and track and field. Keegan is married to trick rider Madison MacDonald and make his home in Merkel, Texas.