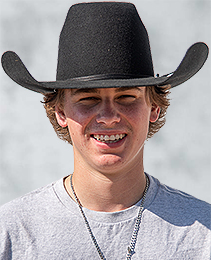 A 2nd generation chuckwagon competitor, Kaeden is the son of chuckwagon driver Kris Molle, and enjoyed a successful rookie season on the WPCA Pro Tour, finishing 8th in the World Standings which ranked him second among an extremely tough rookie outrider class of 2021. He made his debut ride behind his father's wagon at the 2021 Dewberry World Chuckwagon Races, which turned out to be a day money run. He helped his father to first place in the overall in the aggregate standings at Dewberry as well.

A student at Dr. Folkins Community School, Kaeden enjoys hockey, driving Percheron teams and fixing old trucks in the off season. He was a member of the Wainwright Bisons Hockey Club that captured the 2019 NEAHL Midget Hockey Championship, has a girlfriend named Jordan Gibb, and makes his home in Chauvin, Alberta.